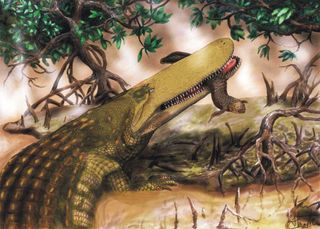 About 100 million years ago, this so-called shieldcroc may have preyed on monstrous fish called Coelacanths.
(Image: © Henry Tsai, University of Missouri)

LAS VEGAS — A newly described species of ancient crocodile with a strange, shield-like skull may have chowed on 13-foot (4-meter) -long fish in Cretaceous-era rivers.

The croc is known by a chunk of skull excavated in Morocco and acquired by the Royal Ontario Museum of Canada from a collector. Only now, however, have paleontologists examined the skull and determined that it belonged to a new — and enormous — species.

"It looks like the animal probably had a head size of two meters [6 feet]," said study researcher Casey Holliday, a professor of anatomical sciences at the University of Missouri who analyzed the specimen.

Even more intriguingly, Holliday said, the animal had a shield-like structure on the top of its skull that would have supported skin and blood vessels much like the frills of horned dinosaurs like triceratops. It's likely that "shieldcroc," as the new fossil is known, would have used this structure for display, Holliday said.

Other specimens of species closely related to shieldcroc have been described, but not since the 1920s, Holliday said. And because those specimens were found by German archaeologists, they ended up getting blown up in the bombings of World War II.

The newly surfaced chunk of crocodile skull reveals that shieldcroc was a member of a group called the eusuchians, a lineage that includes modern crocodiles and alligators. Shieldcroc, which lived about 100 million years ago in the late Cretaceous Period, is the first confirmed eusuchian ever found in Africa. [Top 10 Deadliest Animals]

"There's an argument as to where modern crocs really evolved," Holliday said. "This kind of pulls that equation closer to the Europe/Mediterranean region."

Extrapolating from the size of shieldcroc's braincase suggests that the animal grew to lengths of 50 to 60 feet (15 to 18 meters), a size that Holliday called "pretty ridiculous." More likely, he said, those proportions are off and shieldcroc was closer to 30 to 36 feet (9 to 11 meters) long.

Shieldcroc's relatively delicate, duck-like jaws were likely not equipped for any ultra-dramatic feats like fighting T. rex, Holliday said. But the crocodile was still pretty fearsome, said study researcher Nick Gardner, an undergraduate at Marshall University in West Virginia. Shieldcroc shared the river with lungfish and ancient fish called Coelacanths that could have grown to be 13 feet (4 m) long. It's very possible that shieldcroc considered these monster fish to be prey, Gardner told LiveScience.

"These [fish] are big," Gardner said. "They're not pushovers."