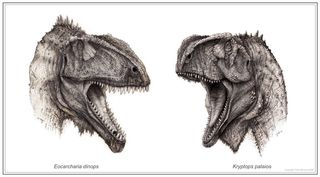 From the sands of the Sahara, scientists have uncovered the bones of two new ferocious dinosaur predators — one that makes the kills and another that feasts on the leftovers.

The fossils represent previously unknown species that roamed the Earth about 110 million years ago during the Cretaceous Period.

"It was 25 feet long, certainly a terror and probably one of the top predators," said University of Chicago paleontologist Paul Sereno, who discovered the dinosaurs.

Eocarcharia could rip off limbs and gash open prey with its blade-like teeth. It had a long bony eyebrow that gave it a menacing glare, and might even have used its brow bone to butt heads with mating competitors.

"You see some animals get up next to each other, get mad and smack each other, defending their territory," Sereno said. "I think that’s probably what they were doing with that kind of brow."

The other discovery was Kryptops palaios, or "old hidden face," named after its fearsome visage nearly all covered in horns. With its armored jaws and small teeth, it was probably better at gnawing on already dead animals than snapping at live prey.

"We think this is a scavenger that would play a role similar to a hyena going after carcasses," Sereno said. "It was not specially adapted for crunching bones. If you're going to actively pursue something you need jaws like Eocarcharia."

The two dinosaurs were of a similar size, with a hip height (a common measure of stature for dinosaurs) of 7 feet (2 meters). They weighed about as much as an Indian elephant, roughly 3 to 4 tons. The two species seemed to coexist in the same habitat at the same time.

"They lived together," Sereno said. "That in and of itself is rather spectacular. You’ve got these multi-ton animals eating meat and living together along with a 40-foot crocodile that was also chomping on things."

The crocodile, called Sarcosuchus and nicknamed "SuperCroc," was almost twice as long as modern crocodiles. Sereno and his team uncovered the fossils of the new species, along with bones from SuperCroc, on a 2000 expedition to Niger.

"It's fascinating to go there because you don’t know what you're going to dig up next," Sereno told LiveScience. "We're finding dinosaur worlds that we didn’t know about."

Although a barren desert now, the Sahara used to be a lush forest, dense with plant and animal life.

"It was totally different back then," Sereno said. "It was a verdant — in part forested — flood plain. We find tree trunks, there must have been a river to support a gigantic crocodile. And it was rich in herbivores, food for carnivores."

In fact, Kryptops likely ate Eocarcharia's leftovers. The two most common cafeteria items for the predators were the dino herbivores Lurdusaurus and Nigersaurus, both of which were about the same size as their hunters.

Though they lived at the same time as the Tyrannosaurus rex, the new dino species never crossed paths with the more famous predator, which lived exclusively on the northern continental mass, Laurasia (what became North America and Asia), while Kryptops and Eocarcharia occupied the southern continent, Gondwana (which became South America, Africa, Antarctica, India and Australia).

The findings will be described this month in the journal Acta Palaeontologica Polonica.