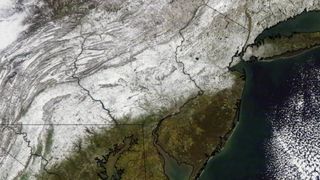 The surprisingly early snowstorm that smacked the East Coast this weekend picked up energy after crossing the country, producing an "extreme precipitation event" with damaging effects magnified by the fact that leaves remained on the trees.

"In many cases, this storm is unprecedented," said Chris Vaccaro, a spokesman for the National Weather Service.

The record-breaking storm set itself apart by dumping snow, measuring as deep as 32 inches (81 centimeters) in Peru, Mass., along a wide swath of the East Coast, from Virginia to Maine, at a time when conditions are usually too warm for snow.

"Usually a lot of these cities will see their first inch of snowfall in late November into December," Vaccaro said. "This type of storm is several months ahead of schedule."

Dozens of locations from Virginia to Maine set daily snowfall records on Oct. 29 and Oct. 30. New York’s Central Park recorded 2.9 inches (7.6 cm), the first time since record-keeping began in 1869 that an inch or more of snowfall has been recorded there during the month of October, according to the NWS.

Is global warming to blame? While it is difficult to connect a specific weather event to human-caused climate change, researchers have predicted that precipitation events, including snowstorms, will become more extreme, according to Vaccaro. [FAQ: Global Warming and Snowstorms]

Kevin Trenberth, a senior scientist at the independent National Center for Atmospheric Research in Boulder, Colo., got a little more specific.

Climate change likely increased the amount of snow by five to 10 percent, since the storm picked up moisture from the Atlantic Ocean, Trenberth said. The oceans have warmed, on average, about 1 degree F (0.6 degrees C) since the 70s, and warmer oceans means more moisture in the atmosphere to feed storms.

The storm that hit the East Coast was a re-energized version of one that hit the western part of the country almost a week earlier. Between Monday and Wednesday (Oct. 24 and Oct. 26), the high temperatures there dropped from 80 degrees Fahrenheit (27 degrees Celsius) to 32 degrees F (0 degrees C) with heavy snow in Denver, Colo., for example, Vaccaro said.

The storm traveled east across the country, tapping into moisture off the coast of North Carolina at Cape Hatteras to revive itself. Meanwhile, cold air traveling from a high-pressure area over southeastern Canada probably formed the foundation for a snowstorm, rather than a rainstorm, which would have been more typical this time of year. As the developing storm moved northeast off the mid-Atlantic coast and off the northeast coast, it continued to draw cold air southward, and drop record-breaking amounts of snow, he said.

Large storms like this, called Nor'easters, aren't common this time of year, but even more unusual was the supply of cold air that helped produce the very heavy wet snow across the region, Vaccaro said.

The timing of the arrival of the storm compounded its effects, because heavy snow collected on tree branches with leaves still on them, causing them to break and knock down power lines. News reports this morning suggest about 2.5 million people were without power from the storm.

"A bad winter storm is a bad winter storm on its own, but when you combine the leaves on top of that it makes it much more severe," said Elizabeth Matthews, spokeswoman for ConEdison, which provides electricity to most of New York City and Westchester County in New York.