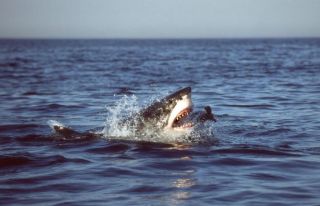 After the attack on an American diver by a great white shark off the coast of Australia, the rumor mill is swilling with talk of a "rogue man-eating shark" that developed a taste for humans, killing three men over the last two months.

The most recent attack happened on Saturday when a great white shark attacked and killed American diver George Thomas Wainwright. Two previous attacks on humans by great whites have occurred in the last two months, one killing an Australian swimmer on Oct. 10 and the other a body boarder who was lethally attacked on Sept. 4.

Australian waters usually see about one fatal shark attack per year; but these waters are the primary home of the great white shark, a large species that can grow up to 20 feet (6 meters) long. Last year, 14 unprovoked shark attacks on humans were reported in Australia, only one of which was fatal.

Scientists say the recent attacks probably came from three separate sharks."There's whales moving by that coastline at this time of the year, and the white sharks follow," George Burgess, a researcher at the University of Florida and curator of the International Shark Attack File, which catalogs shark attacks around the world. "The chance of an individual shark being involved in all three of these incidences is astronomically low. They travel 40 to 50 miles a day." [Image Gallery: Great White Sharks]

Rogue sharks, typified by the shark in "Jaws," are thought to repeatedly attack humans, though such behavior is abnormal for sharks.

"The theory of a 'rogue' shark is unlikely, sometimes a single shark may be responsible for subsequent attacks done in the same area, in a clustered pattern," Fabio Hazin, a researcher at the Federal Rural University of Pernambuco in Brazil, told LiveScience in an email."This, however, tends to be more a consequence of the shark and human beings being close together than to a vicious nature of some shark specimens."

One example of such a rogue, the only that Burgess has seen in his 40 years of cataloging shark attacks, happened in Egypt last year. A ship of imported sheep from New Zealand headed to Egypt had been dropping their dead along the way. This lured a shark to the shore, where it attacked five people, killing one.

"That was a very different species and different ecological situation," Burgess told LiveScience. "It was a once in a lifetime experience for myself, after 40 years as a keeper of shark attacks."

A rogue white? Not so fast.

Australia's great whites are currently in the midst of their annual migration (they follow the whale migration paths up the western Australia coast), which would bring them into contact with humans. Three different sharks, following the same path up the coast and passing the same human-infested bathing and boating areas, are likely responsible for the recent attacks Burgess said.

"This is a very unlikely candidate for one to have stayed around and gotten the taste for humans, particularly in the case of the white shark, which is so highly migratory," Burgess said.

There were several possible reasons why shark attacks in the area might be higher than normal, Burgess said. It's possible that changes in climate may be shifting migration patterns, bringing sharks and humans closer together. Warmer temperatures would also bring more humans into the water. [10 Incredible Animal Migrations]

I'd rather win the lottery

Internationally, the number of shark fatalities is down, though the actual number of attacks is rising; shark attacks hit a global 10-year high in 2010 with 115 human-shark incidents that year, 79 of which were unprovoked. That increase is probably due to increased human presence in shark territory. Only six of these incidents ended in a dead human, though.

"We should always be cautious when entering into the sea, since it is an environment different from the one we live in," Hazin said. "We should not forget that drowning kills thousands and thousands more people every year than shark attacks."

The shark attacks in Australia have prompted calls to kill off any sharks in the area, which Premier Colin Barnett is said to be considering. Researchers are against such a shark hunt, since there is no way to know which shark or sharks are responsible for the human deaths without killing them and cutting open their stomachs.

"The region will be better off if the resources being given to hunt the killer shark would be used to study the situation … and reduce the chances of it happening again," Burgess said. "The only answer we are going to find is if we scientifically study the situation carefully and understand better the movement patterns of the sharks."