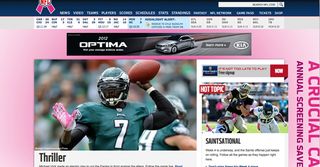 One of the most tried-and-true marketing techniques is the use of gender cues in logos: "This is pink, so you, female consumers of the world, should buy it," the thinking goes. Along these same lines, breast cancer awareness campaigns color their ribbons, banners and ads pink to draw women's attention to their message. October is Breast Cancer Awareness Month, and pink is everywhere.

However, recent research suggests that campaigners ought to rethink the pink. Stefano Puntoni, an associate professor of marketing management at the Rotterdam School of Management at Erasmus University and his colleagues found that playing to gender cues, such as coloring breast cancer ads pink to target women, can trigger defense mechanisms and have the opposite of their intended effect.

In the first experiment, the researchers explained, "we examined women’s personal breast cancer risk estimates following exposure to a breast cancer advertisement that either contained gender cues (e.g., pink ribbon) or minimized them."

After looking at a pink breast cancer awareness ad, women rated themselves as being significantly less at risk of getting breast cancer than they did after seeing gender-neutral ad.

"As a control, we also assessed risk perceptions for several gender-neutral diseases," the researchers wrote. Pink ads for diabetes, kidney and heart failure, and other gender-neutral diseases had no effect on female study participants' assessments of getting those diseases compared with the same ads in neutral colors. This showed that the pink ad was specifically making women feel less vulnerable to breast cancer, not just all diseases, Puntoni said. [Is a Potential Cancer Cure Being Ignored?]

The researchers conducted several variations on that experiment, with more than 350 female subjects. Each study produced similar results, which were found to be statistically significant. "In one study, we found that in a control condition, 77 percent of [women] decided to donate to ovarian cancer research" — which, obviously, only affects women — "when choosing which type of cancer research to donate money to. In a gender priming condition, that figure dropped to 42 percent," Puntoni told Life's Little Mysteries.

Even gender-priming in the form of asking female study participants to write essays on gender (as opposed to essays on neutral subjects) caused them to rate themselves as less vulnerable to getting breast cancer, and less likely to donate to ovarian cancer research.

Puntoni thinks the explanation comes from psychology and the way people react to threatening ideas. "What happens is, these [gender cues] set off very strong denial mechanisms," he explained. "By adding all this pink, by asking women to think about gender, you're triggering that. You're raising the idea that this is a female thing. It's pink; it's for you. You could die. The cues themselves aren't threatening — it's just a color! But it connects who you are to the threats." [How Colors Got Their Symbolic Meanings]

For example, this month (October), many NFL football players will wear pink gloves, cleats and towels in honor of breast cancer awareness, and the NFL.com website is dressed in pink. "This may be a great way to get men to support the cause, "perhaps by donating money or by putting pressure on their partners to do regular screenings, he said.

Knowing when and when not to use gender cues will be a new challenge for marketers. "[Puntoni's study] seems to suggest that marketers who target segments of at-risk consumers with messages aimed at enhancing these consumers' welfare need to walk carefully and attend to a fine line," said Joan Meyers-Levy, professor of marketing at the University of Minnesota.

According to some experts, the findings may have major implications for other kinds of health warnings. For example, starting next year, the Food and Drug Administration will require cigarette makers to include graphic images on cigarette packaging, including diseased lungs or a man blowing smoke from the tracheotomy hole in his throat, but these warning labels may be counterproductive.

"The use of these images and stronger label language is intended to help curb smoking. Yet [a brain scan study] has shown that the more graphic the cigarette package warning, the more activity is seen in the part of the brain that induces smoking," Chris Bevolo, the author of two books on health care marketing, wrote in a response to Puntoni's findings on his website. "In other words, perversely, the harsher the warning, the more people want to smoke. Perhaps the same psychological 'denial' mechanism is at work here."

In short, these horrifying images try to make smokers identify with the possibility of getting lung cancer. Instead, they may trigger a denial mechanism that makes smokers feel less likely to get cancer — and thus more free to smoke. "I can imagine that graphic tobacco warnings may trigger defensive responses in smokers, similar to the effects in our studies, especially among heavy smokers, or people who see smoking as an important part of who they are," Puntoni said.

The human brain is a complex entity, and simple formulas in ad campaigns don't always manipulate it in the desired way. Puntoni suggests that empowering women and making them feel good about themselves may be better ways of raising breast cancer awareness than gender cues: "The emphasis on achievement and community might be a good way to avoid defensive responses ... because they might help women feel strong and good. In our studies, we found that making women feel good about themselves builds a buffer that allows them to cope with the threat posed by breast cancer without triggering defensive denial."