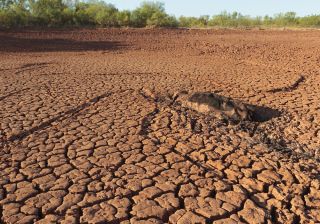 The carcass of a cow that became mired in the mud in a dry stock tank in Knox County, Texas during the summer drought.
(Image: © Earl Nottingham, Texas Parks and Wildlife)

In Texas, there's no avoiding this year's record drought. Trees, parched of water, are dying. Fires are springing up in areas used to moist, almost swampy, conditions. Without enough grass to eat, even the longhorns are growing scrawny, their ribs showing through their hides.

A new set of photographs released by the Texas Parks and Wildlife Department (TPWD) reveal the drought in stark images, including a West Texas lake that turned blood red. The O.C. Fischer reservoir dwindled so low that the water became stagnant and oxygen-deprived. Chromatiaceae bacteria, which thrive in those conditions, took over and turned the water a sanguine hue [Gallery: See Images of the Texas Drought]

No other Texas reservoirs have turned red as yet, said TPWD department spokesperson Steve Lightfoot, but many lakes are being hit hard by low oxygen levels. The oxygen levels in Fairfield Lake in East Texas recently dropped so low that more than 170,000 fish died, Lightfoot told LiveScience.

"There's not really anything we can do other than monitor and assess to evaluate restocking efforts once the lake levels do come up," Lightfoot said.

About 85 percent of Texas is in the highest level of drought possible, according to the U.S. Drought Monitor. The drought is driven largely by La Nina cycles, Texas state climatologist John Nielsen-Gammon told LiveScience in August. Climate change has probably played a negligible role in the lack of precipitation, according to Nielsen-Gammon's blog, Climate Abyss. Climate models put Texas between areas likely to get drier as a result of global warming (Mexico) and areas likely to get more wet weather (the northern U.S.), Nielsen-Gammon wrote. Climate change may have added one half to one degree Fahrenheit of heat to the Texas summer, he calculates, but 2011 would have been dry and hot in Texas even without global warming.

However, La Niña may be gearing up again in the tropical Pacific, which could herald another dry winter — and a multiyear drought — for Texas. [The World's Weirdest Weather]

A tropical storm or hurricane might bring much-needed relief, but that chance has likely passed. According to Houston Chronicle science writer Eric Berger, the odds of a hurricane striking Texas after Sept. 24 are about 50 to 1, based on historical records.

"It's hard to rule out anything for this year because the Gulf waters are so warm," Berger wrote on his blog, SciGuy, on Sept. 24, "but Texas is probably done with hurricanes for 2011."

The state's wildlife is already feeling the pain. Fawn survival is low this year for Texas deer, Lightfoot said, because their food supply is drying up. But the state is home to more than 4 million deer, he said, and hunters are still being urged to harvest animalsto prevent mass starvation this winter when food becomes even scarcer.

A bigger concern, Lightfoot said, is what will happen to the migratory waterfowl that pass through Texas starting in September and stretching into the late fall. The weather has been wet in Canada and the northern U.S., where the birds breed, and a large population headed into drought-stricken Texas may spell trouble.

"Without adequate water, those birds are going to have to look elsewhere," Lightfoot said.

Meanwhile, the dry weather and extreme heat this summer have contributed to fires across the state. More than 3.5 million acres of Texas have burned this year, including the devastating Bastrop fire in the eastern part of the state. That fire burned more than 34,000 acres and destroyed more than a thousand homes.

Forests that haven't burned are also in trouble. The Houston area is likely to lose 10 percent of its tree canopy this year, according to Jennifer Lorenz, the executive director of the Houston-based land preservation group Bayou Land Conservancy.

"We hit the fall before fall even hit here, with all the brown color," Lorenz told LiveScience. "You just look out and it's a sea of brown in a lot of areas."

Waterways are also parched, Lorenz said, and much of the water filling the bayous in the Houston area is actually runoff from lawn watering rather than natural flow. Raccoons, opossums and armadillos are showing up in manmade water fountains outside the Bayou Land Conservancy office, she said, desperate for a drink.

"We're seeing more of those mammals out during the day," Lorenz said. "That's a big sign that they're suffering."

Correction: This article was updated on Sept. 28 to correct the name of the Bayou Land Conservancy.