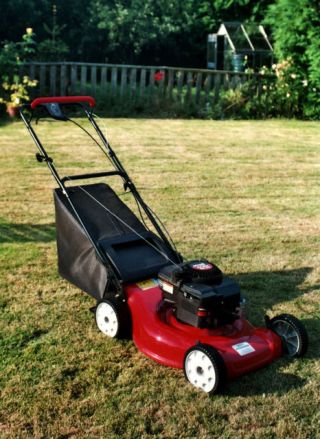 Photo taken by Pamela Benn. The morguefile contains photographs freely contributed by many artists to be used in creative projects by visitors to the site.

CORRECTION: Due to an error discovered in the scientific paper after this article was posted, the story below has been updated to remove a statement that emissions from lawn maintenance could "exceed four times" the carbon they end up storing, and replace it with “similar to or greater than.”

According to Jennifer Fitzenberger, assistant director of media relations at the University of California, Irvine: "Emissions from lawn maintenance are now 'similar to or greater than' the amount of carbon stored by ornamental grass in parks , depending on management intensity...There was a spreadsheet error in the scientific paper caught after our release went out, hence the revised numbers. The overall message still stands though, that turfgrass management can create more greenhouse gas than plants remove from atmosphere." Lush green lawns may not be as good for the environment as you might think.

A new study suggests that, in certain parts of the country, total emissions would actually be lower if there weren't any lawns.

Previous studies have demonstrated that lawns comprised of turfgrass can potentially function as carbon sinks since they help remove carbon dioxide from the atmosphere. But the maintenance of lawns — fertilizer production, mowing, leaf blowing and other lawn management practices — may generate greenhouse gas emissions that ultimately are similar to or greater than the carbon they end up storing, according to the study.

"Lawns look great — they're nice and green and healthy, and they're photosynthesizing a lot of organic carbon," said researcher Amy Townsend-Small,who co-authored the study. "But the carbon-storing benefits of lawns are counteracted by fuel consumption."

To reach their conclusion, the researchers sampled grass from four parks around Irvine, Calif. that contained either ornamental lawn turf or athletic field turf, which tended to be more trampled and required replanting and frequent aeration. Samples were taken from the soil and air above the turf, and analyzed to measure carbon sequestration and nitrous oxide emissions. The investigators then compared that data to the amount of carbon dioxide emissions that resulted from maintaining the turf, which included fuel consumption, irrigation and fertilizer production.

The results, detailed in the forthcoming issue of the journal Geophysical Research Letters, showed that nitrous oxide emissions from lawns were comparable to those found in agricultural farms, which are considered among the largest emitters of nitrous oxide globally. In ornamental lawns, nitrous oxide emissions from fertilization offset just 10 percent to 30 percent of the carbon that was sequestered. But day-to-day management required fossil fuel consumption that released as much or more carbon dioxide than the plots could take up.

Athletic fields fared even worse. They didn't trap nearly as much carbon as ornamental grass but required just as much emission-generating care.

"It's impossible for these lawns to be net greenhouse gas sinks because too much fuel is used to maintain them," Townsend-Small said.