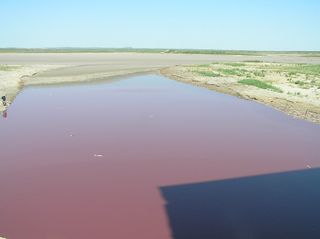 OC Fisher, a reservoir in West Texas, turned blood-red in recent weeks — what's left of it anyway. Due to unrelenting drought in Texas, the lake has almost entirely dried up, leaving thousands of dead fish behind. As of the last week in July, when this photo was taken, bacteria had turned the stagnant dregs of the lake red.
(Image: © Texas Parks and Wildlife Inland Fisheries--San Angelo)

A Texas lake that turned blood-red this summer may not be a sign of the End Times, but probably is the end of a popular fishing and recreation spot.

A drought has left the OC Fisher Reservoir in San Angelo State Park in West Texas almost entirely dry. The water that is left is stagnant, full of dead fish — and a deep, opaque red.

The color has some apocalypse believers suggesting that OC Fisher is an early sign of the end of the world, but Texas Parks and Wildlife Inland Fisheries officials say the bloody look is the result of Chromatiaceae bacteria, which thrive in oxygen-deprived water.

"It's just heartbreaking," said Charles Cruz, a fish and wildlife technician with Texas Parks and Wildlife in San Angelo, Tex.

[IMAGES: The 10 Strangest Places on Earth]

Texas is experiencing major drought this summer, with 75 percent of the state's area in an "exceptional" drought, the highest level, according to the National Drought Mitigation Center (NDMC). The state had hoped for some relief from Tropical Storm Don last week, but the system fizzled and brought only an inch or two of rain to areas near the coast.

The drought has taken its toll on a number of reservoirs in West Texas, Cruz told LiveScience. OC Fisher has never been completely full, Cruz said, but it was stocked with catfish, bass, sunfish and other popular targets for fishermen.

"We surveyed the lake, I believe it was last year, and we had a pretty good fish population out there," Cruz said. "It was pretty sickening going out there, watching lake levels just drop and drop and drop and seeing these nice trophy-sized bass just floating dead."

As of last week, all that remained of the lake was a small pond a few feet deep, Cruz said. There were thousands of dead fish, he said, but no sign of life.

Pictures of this blood-red pool circulated online in fishing forums and caught the notice of Indiana preacher Paul Begley, who said in a YouTube video that the lake might be evidence of the apocalypse as predicted by the Biblical book of Revelation.

Begley may not have any more luck at predicting the end of the world than did Harold Camping, the radio preacher who set the date for May 21, 2011. But for as long as the drought persists, the OC Fisher reservoir is a reservoir no longer.

"I don't know what's left in there now. We haven't been back," Cruz said. "But I would guess it's probably pretty much gone already."