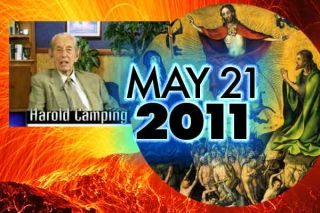 Radio preacher Harold Camping predicted that May 12, 2011 would mark the beginning of the end of the world
(Image: © Karl Tate, TechMediaNetwork)

Are you relieved or disappointed? Doomsday came and went without a peep, as May 21 failed to bring about earthquakes, a rapture or the mass excavation of all the world's dead.

The rumor that May 21 would kick off the end of the world was started and propagated by Harold Camping, the president of the Oakland, Calif.-based Christian radio broadcasting network Family Radio. Camping, who also made a failed doomsday prediction in 1994, had claimed that his mathematical interpretation of the Bible pointed to May 21 as the day of the rapture. Earthquakes were supposed to shake the globe, throwing the dead from their graves as believers' souls ascended to heaven. Five months later, on Oct. 21, 2011, the universe was supposed to end.

Camping has not commented publically on the failed prediction.

Camping is far from the first doomsayer to falsely predict the end of the world. In fact, doomsday experts say that a belief in the end is comforting to some people who see the world as irredeemably evil.

So gear up for 2012, everyone. We heard the Mayan calendar is ending, and it's sure to be a wild ride.