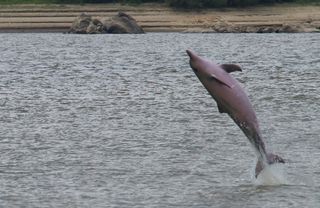 The common Guiana dolphin has just divulged its sixth sense: the ability to sense electric fields. It is the first placental mammal known to pull off this trick, new research finds.

The dolphin, which bears live young like other placental mammals, most likely uses its sixth sense to find prey in the murky coastal waters it inhabits.

"Most of the animals which do this do this to find prey," said study researcher Wolf Hanke, of Rostock University in Rostock, Germany. "All of the dolphins' prey items, like crayfish, all of them generate electric fields to some degree."

The Guiana dolphin looks like the familiar bottlenose dolphin; it is only slightly smaller. It lives close to estuaries, inlets and other protected shallow waters off the north and eastern coasts of South America. [Gallery: Evolution's Most Extreme Mammals]

The researchers examined a Guiana dolphin that had died naturally at the Dolphinariumin Münster, Germany. They focused on specialized pores called vibrissal crypts, which in other animals are located in hair follicles at the bottoms of their whiskers, allowing the animals to sense movement using their whiskers. Through evolution, the dolphins have lost their whiskers, but kept the pores.

They found that the specialized pores — which usually number from two to 10 along the dolphin's snout — are surrounded by nerve endings, have simplified blood vessels and are filled with a special matrix of proteins and cells. The pores also produce a gel-like substance.

To see if these pores react to electric fields, the researchers performed some tests on a live dolphin from the facility. They trained it to react to electric fields by giving it a treat when it correctly sensed the field or lack of field. They tested different strengths of fields; the animal sensed the field correctly most of the time at a very low level — 5 microvolts per centimeter — lower than the level produced by a typical electric fish.

No other "true" placental mammal is known to have developed the ability to sense electric fields. Two members of the monotremes, a strange group of mammals that lays eggs (which includes the platypus), have also developed this ability. The quirky platypus and its cousin the echidnas (spiny anteaters) are semiaquatic and evolved the ability separately from the dolphins.

It's possible other marine mammals also developed the ability, Hanke said. "I think it's possible, it's likely, because there are some dolphins, like the bottlenose, that have little pits on its snout, too. They are smaller, but it's not unlikely that this one or other ones would develop it too," he said.

The electroreception would be used in short-range scenarios, when the dolphins' echolocation (ability to determine the environment around them using sounds and their echoes) becomes less sensitive. These waters are murky, so visibility is limited even at these short ranges, so being able to electrically sense their prey would help these dolphins feed.

Carl Hopkins, a researcher from Cornell University in Ithaca, N.Y., who was not involved in the study, warns that several other studies about electroreception in animals have not been confirmed, and he would have liked to see a larger sample size in this study.

"The paper seems relatively convincing, but the sample size is very small and there really is only one study here, the behavioral assay, since the anatomy does not help with the issue of electroreception," Hopkins told LiveScience in an email. "If this holds up, it will be exciting to do follow-up work."

The study was published today (July 26) in the journal Proceedings of the Royal Society B: Biological Sciences.