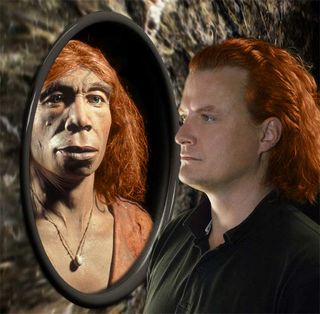 Some Neanderthals may have had pale skin and red hair similar to that of some modern humans.
(Image: © Michael Hofreiter and Kurt Fiusterweier/MPG EVA)

Many modern-day humans may be carrying around a fragment of Neanderthal DNA on one of their sex chromosomes, a new study finds.

The research adds a piece of corroborating evidence to the theory that Neanderthals and humans interbred sometime after humans migrated out of Africa between 50,000 and 80,000 years ago. The DNA fragment, found on the human X chromosome, is present in 9 percent of humans across the world from Asia to Europe to America — except in Africa, where it does not appear.

"It's in the Middle East, it's in Europe, it's in Eurasia, it's in America, it's in Australia," study researcher Damian Labuda of the University of Montreal told LiveScience. "This one event which led to this on the human X chromosome has to occur very early after modern man left Africa."

Early humans and Neanderthals (Homo neanderthalenis) co-existed, and researchers have long searched for evidence that the two groups mated.

Labuda got his first sign of the interbreeding about a decade ago when he discovered a snippet of DNA on the X chromosome found only in non-Africans and whose origin was unknown. (X chromosomes are sex chromosomes; women have two and men have one, paired with a Y chromosome.)

But until 2010 the group didn't have anything to compare the snippet with. That year, the Neanderthal genome was sequenced, and a team of researchers (not including Labuda) reported in the journal Science that between 1 and 4 percent of the genome of some modern humans hails from Neanderthals, stocky hominids who lived between 130,000 and 30,000 years ago.

That 2010 study used DNA extracted from Neanderthal bones found in Croatia. With the new availability of a partial Neanderthal gene sequence from Croatia, Labuda and his team had something to compare their mysterious X chromosome fragment with.

Using DNA from 6,092 modern X chromosomes from every continent, the researchers found that the modern-day fragment matches one found in the Neanderthal genome. [Read: Who Were the Neanderthals?]

"Dr. Labuda and his colleagues were the first to identify a genetic variation that was likely to have come from an archaic population," David Reich, a Harvard School of Medicine geneticist who worked on the original Neanderthal sequencing project, said in a statement. "This was done entirely without the Neanderthal genome sequence, but in light of the Neanderthal sequence, it is now clear that they were absolutely right."

The next challenge, Labuda said, is to tease out whether Neanderthal DNA made a difference to the ability of early humans to survive and thrive.

"It is interesting to know how many of these fragments there are, where they are, what they are doing," Labuda said. "Are they neutral like the one which we have found, or do they provide some functional addition and could be maybe beneficial?"

The research was published in the July issue of the journal Molecular Biology and Evolution.