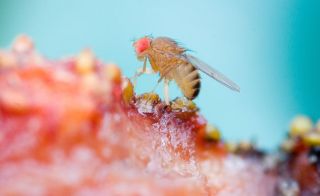 A female Drosophila simulans fruit fly perched on top of a rotting strawberry. Scientists find parasites that used to make these flies less fertile have evolved to make female hosts more fertile in order to spread themselves in nature.
(Image: © Andrew Weeks)

Parasites are by definition bad for you. Some, such as malaria, can kill. Others, like microbes known as Wolbachia that are found in more than one-fifth of all insects, often make female hosts less fertile.

The typically nasty Wolbachia can make females more fertile instead of less, a study reveals. They're not doing it out of the goodness of their non-existent hearts—they boost host fertility to better spread themselves in nature.

I'll scratch your back

These findings could shed light on how symbiotic or mutually beneficial partnerships develop in nature, such as the pivotal relationship widely believed to have led mitochondria to dwell in cells and help them breathe oxygen.

"Mitochondria are thought to have evolved from a symbiotic relationship. It may be that the Wolbachia in this case is well on the way to having a similar relationship that will eventually develop into a dependency by the host on the Wolbachia for survival," said evolutionary biologist Andrew Weeks at the University of Melbourne in Australia.

The new research from Weeks and his colleagues "is probably documenting a case that is headed in that direction, where Wolbachia is needed for host survival," he said.

Wolbachia are bacteria that insects get only from their mothers. They can display a bewildering diversity of additional effects, such as turning males to females, causing infected females to reproduce without males and triggering vicious cycles of increasing female promiscuity and male sexual exhaustion. The presence of these parasites also often carries a toll on their victims—for instance, cutting down the number of eggs that females produce.

Still, intuition suggests that in order to prosper, these microbes should try and evolve ways to crank up the number of offspring that their hosts birth in order to infect more victims.

"We had a very thorough theoretical analysis which suggested that this could and should evolve, but we had no idea of the timeframe that this might take," Weeks said.

Weeks and his colleagues focused on populations of the fruit fly Drosophila simulans living in California. Scientists first detected Wolbachia infesting these flies some two decades ago, and have tracked the infection ever since as it spread more than 400 miles from south to north.

Originally the parasite diminished the fertility of infected females by 15 to 20 percent under laboratory conditions. After exhausting research that involved counting more than 200,000 fruit fly eggs by eye under a microscope, Weeks and his colleagues have now found that in just 20 years, the parasite now causes infected females to display an average 10 percent boost in fertility in the lab, findings detailed online April 20 in the journal PLoS Biology.

"We just didn't expect it to happen so quickly," Weeks told LiveScience. It remains uncertain how exactly Wolbachia triggers such fertility, although Weeks speculated the parasites might provide their hosts some kind of nutritional benefit.

Such a dramatic evolutionary change is traditionally thought to take place over thousands to millions of years, and not in just two decades, "although it is becoming clearer that evolution does work on such short time scales," Weeks said.

The explosive speed at which bacteria grow likely helps explain the speed of this evolutionary change. The fact that Wolbachia can alter itself so quickly might also help explain why the germs have such a diversity of effects on their hosts, Weeks added.