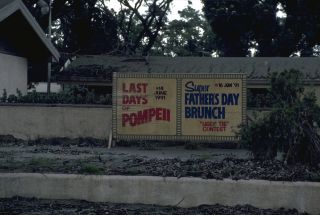 Yesterday, a tropical depression moving toward the Philippines strengthened into Typhoon Yunya. Now the storm is steaming toward the island of Luzon — and the erupting Mount Pinatubo — with peak winds of 120 miles per hour (195 kilometers per hour). The storm's winds are likely to throw ash in unexpected directions. And Yunya's rains threaten to turn falling ash into mud. By tomorrow, it will be raining concrete on Luzon.

The researchers at the nearly abandoned Clark Airbase woke this morning to clear skies. Pinatubo had been rumbling since 4 a.m., but at first light, the volcano looks remarkably peaceful. For now, the steam and ash have stopped flowing from the volcano's maw.

Richard Hoblitt, along with the other USGS and Filipino geologists at the scene, worry that the quiet period is the calm before another large eruption. But when Pinatubo stays sleepy, they cautiously board a helicopter to get closer to the mountain. They can see a vent 656 feet across (200 meters) in the mountain's dome. Small deposits of pyroclastic flow, the hot, gassy ash that pours from erupting volcanoes, extend more than two and a half miles (4.5 kilometers) from the vent.

And then, unexpectedly, the volcano belches again at 1:09 p.m., erupting for three minutes. Hoblitt and other researchers dash out on the helicopter, trying to make some last-minute equipment repairs before Yunya makes fieldwork difficult. Ash is rising 9 miles (15 km) into the air, spewing from multiple sources around the volcano. Low-level eruptions are occurring more and more frequently now.

This is the last time the researchers will see Pinatubo up close. That afternoon, it starts to rain.