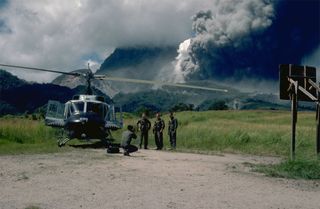 Field assessments of the volcano's activity were undertaken just before the colossal eruption.
(Image: © USGS)

June 10, 1991 - It's a day of movement at Clark Airbase. The base's commander, Major General William Studer, has ordered an evacuation for 14,500 U.S. personnel and their dependents as Mount Pinatubo shows signs of an impending blowout.

The decision to evacuate is a potentially costly one, especially if the volcanoes rumblings drag on. The American and Philippine governments are in negotiations about extending the lease to the base, which is up in September. The threat of the volcano has thrown those negotiations into uncertainty.

Meanwhile, the American and Filipino volcano monitoring team are packing up, too. But they're not going far — just to the other side of the airbase. Clark has reliable power, water and communications, so the team needs to stay here to monitor the volcano's every grumble.

Twenty years on, the geologists realize that this move wouldn't have saved their lives, had Pinatubo's upcoming eruption been at full strength.

"If the eruption had been bigger than it was, it still wouldn't have been far enough, based on what we learned subsequently," John Ewert, the scientist-in-charge at the USGS Cascades Volcano Observatory, told LiveScience. "It turned out that what happened in 1991 was on the small side [for Pinatubo]."

As the base empties out, the monitoring team is left behind with only a skeleton crew of military personnel guarding expensive equipment. The team is subsisting on MREs (ready-to-eat meals used by the military) and whatever is left in the base's commissary. And though they're only a handful of kilometers from an angry volcano, they're almost hoping for an impressive eruption.

"If the volcano had not performed, it wouldn't have been very good for our careers, let's put it that way," Hoblitt told LiveScience.

Tomorrow: Waiting for Pinatubo to blow.