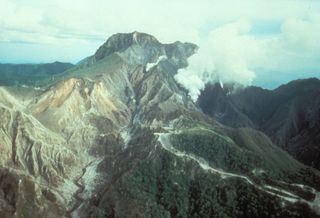 Mount Pinatubo shows early signs of activity in April 1991. The volcano, located on the Philippine island of Luzon, had been quiet for centuries, and scientists knew little about its eruptive history.
(Image: © USGS)

Filipino and American geologists have been monitoring the volcano since early April, when an explosion opened up a line of vents and fissures on the side of the mountain. Since then, Mount Pinatubo has rumbled and slept, rumbled and slept. But as May turned to June, the rumbling began outpacing the quiet periods. And now, a dome is growing on the mountain as a plug of lava pushes upward, trying to escape.

The question for the watching geologists is whether the lava dome will relieve enough pressure to keep the mountain intact. Might the volcano settle down after this small burp? Or is it going to blow up in a big way?

Up until April, Mount Pinatubo seemed an unlikely candidate for an explosion. People know it's a volcanically active area: The mountain has even been surveyed as a potential geothermal energy source. But there's no record of Pinatubo erupting. In fact, when geologists now tell locals that a volcano is threatening their existence, locals assume the scientists mean Mount Arayat, a cone-shaped mountain about 26 miles (42 kilometers) west of Mount Pinatubo. Pinatubo, with its lush, forest-covered slopes that rise only 656 feet (200 meters) over the surrounding mountains, lacks a distinctive profile. It just didn't look like a volcano.

But ever since that first April 2 eruption, the volcano's rumbling has kept scientists at the Philippine Institute of Volcanology and Seismology (PHIVOLCS) and the United States Geological Survey (USGS) Volcano Disaster Assistance Program on their toes. Working almost around the clock, the researchers have been putting out seismometers to detect earthquakes around the mountain, measuring the volcano's gas output and poking around old volcanic deposits to figure out when Pinatubo last blew.

Here's what the frantic weeks of research have taught them: Pinatubo has erupted before, the last time about 500 years ago. Previous eruptions have been big. And now, Pinatubo is stirring again.