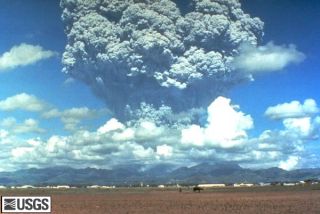 The June 12, 1991 eruption column from Mount Pinatubo taken from the east side of Clark Air Base.
(Image: © USGS)

June 12, 1991 - The residents of the island of Luzon in the Philippines have been holding their breath waiting for an explosive eruption from Mount Pinatubo. Today, on Philippines Independence Day, they get one. In fact, they get two.

At 8:51 a.m. local time, the seismometers on Mount Pinatubo's flanks go haywire as the volcano erupts. A column of ash and steam climbs 11 miles (19 kilometers) into the air as fast as an F-15 jet.

"When you're near an eruption like that you don't hear it," John Ewert, a USGS geologist who was part of the team monitoring the volcano, told LiveScience. "Instead what people got was, their ears would pop. That was the pressure wave."

"This may sound a little odd, but one of our first emotions was relief that we were justified in our concern and admonitions to people that this was a serious situation," Hoblitt told LIveScience.

Hoblitt's greatest worry during the first eruption is that the cloud of hot gases and rock is going to collapse, creating high-speed molten avalanches called pyroclastic flows. These flows can travel faster than 50 miles (80 km) an hour and reach temperatures up to 1,292 degrees Fahrenheit (700 degrees Celsius). Fortunately, the density of the ash cloud is low enough that the ejected gas and rock spews upward into the atmosphere instead of roiling toward the ground.

The eruption lasts only about forty minutes, but the feeling of relief at the short duration is quickly replaced by concern as the ground begins to shake again. Following a few hours of earthquake swarms, Pinatubo blows out again at 10:52 p.m. This eruption lasts only 14 minutes.

The explosions prompt the evacuation of 600 of the 1,500 remaining military personnel at Clark Airbase, and civilians within 18 miles (30 km) of the mountain are urged to get out. The latest evacuation orders bring the number of displaced people to at least 58,000, but Ewert, Hoblitt and their crew aren't going anywhere — in fact, Hoblitt hops on a helicopter before the first eruption even ends to get a closer look.

So far, the winds are blowing the ash away from Clark Airbase. But the geologists know from old volcanic deposits that Pinatubo could send pyroclastic flows as far as their headquarters.

"There was lots of concern about where we were and whether or not we were far enough away," Ewert said.

Tomorrow: Pinatubo doesn't back down.