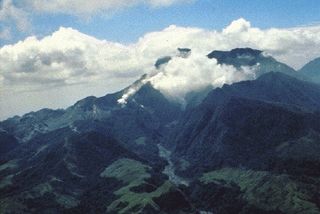 Before a cataclysmic 1991 eruption, Pinatubo was an unassuming mountain peak in the Philippines.
(Image: © USGS)

June 8, 1991: United States Geological Survey (USGS) geologist John Ewert has been at Clark Airbase 9 miles (14 kilometers) from the rumbling Mount Pinatubo since late May. He and his American and Filipino colleagues have been scrambling to keep up with the shudders and emissions coming from the long-quiet volcano, and they're already at a disadvantage. [In Photos: The Colossal Eruption of Mount Pinatubo]

"We're coming into a volcano that no one knew much about," Ewert, now the scientist-in-charge at the USGS Cascades Volcano Observatory, told LiveScience in an interview 20 years after the fact. "There had been no monitoring, no baseline has been collected. No geologic map, no hazards map, nothing. All of that had to be developed between April 2nd and the second week of June. There was an element of building the boat and rowing it at the same time."

On June 7, 1991, with a lava dome bulging on the volcano, the Filipino volcano monitoring agency PHIVOLCS warned residents that a large eruption could happen within 24 hours and recommended evacuations from a 6-mile (10 km) danger zone around Pinatubo's slopes. [Read Yesterday's Flashback]

On June 8, scientists are struggling to understand what's happening inside the volcano so they can advise Filipino and American officials about whether the evacuation zone should be larger — and whether it should include Clark Airbase itself.

The pressure on the geologists crammed into a makeshift operations center on the base (actually a vacant condominium) matches the pressure building deep below Pinatubo. The specter of previous volcano-monitoring failures hung heavy, recalled Christopher Newhall, then the USGS scientist-in-charge of the pre-eruption monitoring, now the Volcano Group Leader at the Earth Observatory of Singapore.

In 1976, the city of Basse-Terre in the Lesser Antilles was evacuated for six months when the La Soufrière volcano threatened a large eruption. More than 76,000 people's lives, not to mention the economy, were disrupted for an explosion that never came.

And then there is the unthinkable: Not getting people out in time. In 1985, the Nevado del Ruiz volcano in Colombia erupted with no warning to the towns below. More than 23,000 people died.