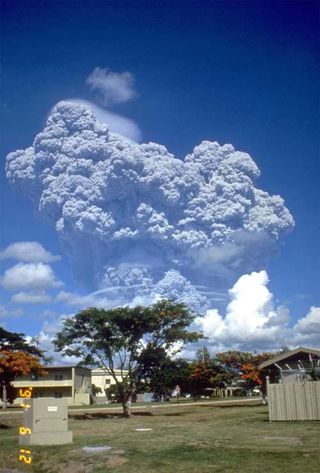 The $140 million to which Jindal referred is actually for a number of projects conducted by the United States Geological Survey, including volcano monitoring. This monitoring is aimed at helping geologists understand the inner workings of volcanoes as well as providing warnings of impending eruptions, in the United States and in active areas around the world where U.S. military bases are located.

Most of the money from the stimulus bill earmarked for monitoring (only about a tenth of the total going to the USGS) will go to modernizing existing monitoring equipment, including switching from analog to digital and installing GPS networks that can measure ground movements, said John Eichelberger, program coordinator for the USGS's Volcano Hazards Program. Much of the expense of this technology comes from the manpower required to make and install it, he added.

"Ultimately most of this creates jobs or saves jobs that would have been lost" to recent budget shortfalls Eichelberger told LiveScience.

When he heard Jindal's remarks, Eichelberger said he "was frankly astonished" that the governor would use this particular example, given his own state's recent brush with a catastrophic natural disaster.

Among the scenarios in which the USGS’s monitoring can assist — the catastrophic eruption of Mount St. Helens on May 18, 1980, which killed 57 people (including a geologist monitoring the mountain) and was the deadliest and costliest volcanic eruption in U.S. history ($2.74 billion in 2007 dollars). This event was preceded by thousands of earthquakes in the two months before the volcano blew its top; some of these prompted the governor of Washington to declare a state of emergency and many residents were evacuated from a designated danger zone.

"This is a hazard we can do something about," Eichelberger said. "We can spend a modest amount of money and prevent a tragedy."

About 50 volcanic eruptions occur around the world every year, according to the USGS. The United States ranks third, behind Indonesia and Japan, in its number of historically active volcanoes (those for which written accounts exist). Most U.S. volcanoes are located in the Aleutian Islands, the Alaska Peninsula, the Hawaiian Islands, and the Cascade Range of the Pacific Northwest, with the rest distributed around the West.

About 65 volcanoes in the United States are considered active; most of these are in Alaska, where an eruption occurs almost every year. Hawaii's Kilauea volcano is one of the most active volcanoes on Earth and has been erupting continuously since 1983.

The USGS has three volcanic observatories — in Alaska, Hawaii and the Cascades — set up to monitor volcanoes for signs of impending eruption.

USGS scientists are currently monitoring Alaska's Mount Redoubt, which has been threatening to erupt since late January. Seismic rumblings from the volcano have alerted geologists that magma might be moving around underneath the surface, preparing to make a potentially explosive appearance. Redoubt last erupted on December 14, 1989, for the fourth time in the 20th century, creating large ash clouds that clogged the air around Anchorage for days.

Monitoring of Redoubt's latest threat of eruption has been hampered by the lack of a GPS network which could not be put in place before because of a lack of funding, Eichelberger said.

"We're kind of half blind there," he said.

In addition to listening for rumbling of the Earth, researchers survey the surfaces of volcanoes, map volcanic rock deposits, and analyze the chemistry of volcanic gas and fresh lava to detect warning signs of eruptions and to determine what type of eruption is most likely to occur.

The USGS has issued several warnings over the past 10 years, though predicting the timing and size of eruptions remains a difficult task.

Volcano monitoring likely saved many lives — and significant money — in the case of the 1991 eruption of Mount Pinatubo in the Philippines (where the United States had military bases at the time), according to the USGS.

The cataclysmic eruption lasted more than 10 hours and sent a cloud of ash as high as 22 miles into the air that grew to more than 300 miles across.

The USGS spent less than $1.5 million monitoring the volcano and was able to warn of the impending eruption, which allowed authorities to evacuate residents, as well as aircraft and other equipment from U.S. bases there.

The USGS estimates that the efforts saved thousands of lives and prevented property losses of at least $250 million (considered a conservative figure).

Volcanoes, of course, aren't the only potential natural disaster that scientists monitor to give people warnings of imminent danger. Hurricanes, tornado-producing storms, earthquakes, tsunamis and flooding events are also watched and forecast.

While those predictions can result in mitigating the damage and losses that result from natural disasters, the research is only useful in a practical sense for residents if authorities pay heed to it. For instance, in the case of Hurricane Katrina, the Natural Hurricane Center was watching the situation like a hawk, but the subsequent preparations and responses by authorities was insufficient to prevent wholesale destruction of large parts of New Orleans and the loss of more than 1,800 lives.

Jindal's comment comes at a time when President Obama has pledged to return science to the White House, an effort widely applauded by scientists who felt shunned by the previous administration.

The criticism of government funding of scientific research was similar to remarks made last fall during the presidential campaign by vice-presidential candidate Sarah Palin, who was dismissive of fruit fly research.