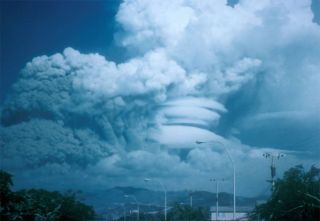 Then, on June 15, the volcano blew its top in the second largest volcanic eruption of this century. The eruption caused high-speed avalanches of hot ash and gas (pyroclastic flows), giant mudflows (lahars), and a cloud of volcanic ash that spanned hundreds of miles across.
(Image: © USGS)

On June 15, 1991, the largest land volcano eruption in living history shook the Philippine island of Luzon as Mount Pinatubo, a formerly unassuming lump of jungle-covered slopes, blew its top. Ash fell as far away as Singapore, and in the year to follow, volcanic particles in the atmosphere would lower global temperatures by an average of 0.9 degrees Fahrenheit (0.5 degrees Celsius). Twenty years after Pinatubo, LiveScience is reliving the largest eruption in the modern era based on what we know now. Join us each day through June 15 for a blow-by-blow account of what happened. [Read earlier installments: June 7, June 8, June 9, June 10, June 11, June 12, June 13, June 14]

The climactic eruption comes on the same day that Typhoon Yunya blows over Luzon, the island where Pinatubo has been biding its time for centuries, building up to today. Yunya would normally be a minimal storm, but her rains mixed with Pinatubo's ash form a heavy, concrete-like mud, which falls out of the sky and falls on rooftops, collapsing them.

"If someone had beforehand told me that I was going to have this huge volcanic eruption 15 kilometers [9 miles] from me at the time that a typhoon was hitting, I would have laughed and said, 'Well, I can't plan for that,'" John Ewert, a USGS scientist who was monitoring the volcano from nearby Clark Airbase, told LiveScience as the eruption's 20th anniversary approached. "And indeed, it's difficult to plan for something like that. But indeed, these things do happen."

Concrete isn't the only thing raining from the sky. At Clark Airbase, chunks of pumice an inch and a half (4 cm) in diameter are falling. It hurts to go outside.

"It was clear that basically all the stops were pulled out and the system was going completely nonlinear," Ewert said. "All the seismometers were going as hard as they could, and then we started losing stations near the volcano because they'd been overwhelmed by pyroclastic flows."

Pinatubo has gone Plinean, a term for large vertical eruptions born in the year 79 when Roman magistrate Pliny the Younger recorded the devastating eruption of Mount Vesuvius. The eruption cloud stretches 21miles (34 km) into the atmosphere. At its top, it blossoms like an umbrella, spanning 249 miles (400 km).

At Clark Airbase, the sound of the volcano is drowned out by a terrible clatter. It's a lahar, a flow of ash, water, and rocky debris making its way down a riverbed from the volcano to the base. The clatter is boulders banging together, tossed around like pebbles in the incredible force of the mudflow.

It's time to evacuate.

By this time, the team is down to only one seismometer — the one they have with them. The rest have been swallowed by Pinatubo.

"The roads were choked with cars and people and water buffalo and we're running away as fast as we can from the volcano, in a pick-up truck," Ewert said. "And we were going at walking pace! Kind of looking over our shoulder for a surge cloud to come over us."

The cloud doesn't come, but it's raining mud, and the truck's wiper's can't keep up. The scientists turn to the one tool left at their disposal: a case of cherry soda shunned by the soldiers at Clark Airbase's commissary as too disgusting to drink. The beverage turns out to be quite handy at rinsing ash off the windshield.

The team makes it to the evacuation point, Pampanga Agricultural College, 24 miles (38 km) away. There, they pass a night swaying to small earthquakes every minute. Every 10 or 15 minutes, a large temblor jolts the college.

What they're feeling, in part, is the collapse of Pinatubo's summit into a caldera 1.5 miles (2.5 km) across. This caldera will later become a crater lake in one of the many changes Pinatubo's eruption will bring upon the landscape.

Despite the size of the eruption, which is second in the 20th century only to an Alaskan eruption that took place in 1912, only a few hundred people are killed, the low number due to proactive evacuation. Later, the death toll will increase to more than 700, as monsoon rains reactivate lahars, sweeping away homes. Disease in evacuee camps also claims lives.

Globally, Pinatubo will lower global temperatures by an average of 0.9 degrees Fahrenheit (0.5 degrees Celsius) over the next year. On Luzon, ash fall continues for months, with Pinatubo sending spurts tens of thousands of feet into the atmosphere as it settles back into slumber.

"Even the aftermath of that eruption would be a significant eruption on its own," Hoblitt said. "It's just that it was preceded by something so much larger."

Twenty years on, the slopes of Pinatubo are still a risky place to be. In 2009, five people died on a jeep tour to Pinatubo's crater lake when mudflows swept down the mountain.

Volcanic events "are not over in a quick and tidy manner in most cases," Ewert said. "When you change the landscape that radically, you make a dynamic environment, which is challenging for humans to deal with."