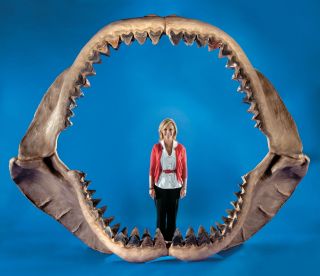 Plenty of standing room: Carcharocles megalodon was the largest shark that ever lived on Earth.
(Image: © Heritage Auctions.)

A shark the size of a semi truck swims through the ocean. Sensing prey ahead, the monster attacks, opening a mouth bigger than a subway car turned sideways, and lined with teeth the size of a man's hand.

And next month, anyone with a spare half-million dollars or so can make a play for the most spectacular remains of these prehistoric creatures ever discovered.

The jaws are constructed with 182 fossilized teeth of the world's largest shark, Carcharocles megalodon, which went extinct about 2 million years ago. They represent the life work of Vito Bertucci, a jeweler-turned-fossil hunter who spent nearly two decades searching for the massive teeth used in the jaw.

Minimum bid is $625,000, but the jaws are expected to fetch up to $700,000, according to David Herskowitz, director of Heritage's natural history department.

The jaw has four shark's teeth that are more than 7 inches (18 centimeters) long — an extreme rarity. "I think there are probably less than 10 known in existence," Herskowitz said.

For millions of years, C. megalodon, one of the largest predators to ever live on Earth, trolled nearly all the planet's oceans. Researchers have found evidence of the giant sharks stretching back 20 million years, but the species vanished from the fossil record about 2 million years ago.

The sharks went extinct at a time when glaciers covered large swaths of the globe, "and some people think that may be related to the extinction of this species, but it hasn't been established," said Catalina Pimiento, a Megalodon researcher with the University of Florida and the Smithsonian Tropical Research Institute.

Like sharks alive today, the prehistoric Megalodon's skeleton was made of cartilage, not bone, so the creatures left little behind for researchers to study. "The only remains you can find in the fossil record are the teeth, because they're hard enough to preserve through geologic time," Pimiento said.

Although that may not seem like much to go on, scientists have been able to use equations based on their knowledge of great white shark physiology — the modern-day species that most closely resembles Megalodon — to extrapolate just how big the ancient sharks grew.

The jaw up for sale in June would represent a truly monstrous shark. One that, according to Heritage Auctions, would have been 60 feet (18 meters) long — a large specimen, even for outsize Megalodons.

Vito Bertucci set the fossilized teeth in their massive fiberglass frame more than 15 years ago. With the help of researchers, Bertucci based the dimensions and details of the jaw on great white sharks.

A gemologist and a jeweler by trade, and an avid scuba diver, Bertucci's passion for shark tooth fossils eventually outshone his other pursuits. He spent years combing the murky rivers and lakes of South Carolina for the prehistoric treasures.

"You could go to a wedding, he'd be in a tux, and he'd pull one of these giant teeth out of his pocket," said Joseph Bertucci, Vito's brother, who still lives where the brothers grew up on Long Island.

Vito died in October 2004, drowned in a muddy river in Georgia, searching for the teeth he loved to hunt. It's not clear what went wrong, but scuba diving conditions were dangerous.

"It's like diving in a cup of coffee. You can't see your hand in front of you," Bertucci said.

Vito's body surfaced four days after he disappeared. He had four Megalodon teeth in his bag when he was found.

Although Vito built several other jaws from his fossils — they are on display in the American Museum of Natural History in New York, and at the Baltimore Aquarium, among other places — Joseph Bertucci said his brother always wanted to sell the largest jaws he ever built, but could never find a buyer with deep enough pockets.

"It's kind of bittersweet," Bertucci said. "I know that he loved this thing."