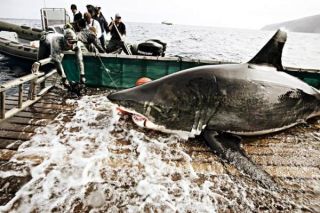 Guadalupe Island, Mexico: A shark being lifted onto the boat after it has taken a buoyed bait. The crew will take measurements and attach a tracking antenna to the dorsal fin before returning it to the water.
(Image: © © Chris Ross/Chris Fischer.)

Great white sharks are giants of the ocean. It is estimated that the largest females can grow to roughly 20 feet (6 meters) long. Yet despite their size, these feared and beloved monsters are elusive, and little is known about their habits.

However, a handful of people have spent a whole lot of face time with great white sharks literally, hanging out within inches of the sharks' fearsome teeth for the sake of research and good TV.

Two of them recently sat down to talk about their adventures.

"We're so passionate about the ocean and its future, and by doing this, it allows us to reach so many more people that's what we've dedicated our lives to," said Chris Fischer, an expedition leader and fixture on outdoor adventure shows for more than a decade.

Fischer, along with Brett McBride, a seasoned boat captain and angler, stars in the National Geographic Channel's "Shark Men," and the two were in New York City for a press tour ahead of the show's second season, kicking off this weekend.

The show follows the voyage of the Ocean, Fischer's 126-foot (38-meter) vessel, as a crew of mariners and sport fishermen assist scientist Michael Domeier in his quest to study great white sharks, a vulnerable species, according to global population data.

To aid his research, Fischer and his crew lift the massive fishes out of the water, allowing Domeier about 15 or 20 minutes to gather data and blood samples and, most importantly, to attach a satellite tracker to a shark's dorsal fin . The sharks are then sent on their way.

Between seasons one and two, the show has tagged roughly 20 sharks, allowing Domeier to track their largely mysterious and little-understood wanderings across the planet's seas.

Some in the scientific and conservation community have questioned the wisdom of the show's methods of hooking and hoisting sharks out of the water. Others say the practice is sound and worth the risk to the animals, and the satellite tags provide valuable data.

It took more than a year to shoot the full season of the show, filmed from 2009 to 2010. Fischer and McBride spoke with OurAmazingPlanet about what they learned, and talked about one controversial episode that has raised eyebrows among some conservationists and scientists, nearly bringing their expedition to a halt.

OurAmazingPlanet: Thanks to you both for talking with us. First, can you tell us a little bit about your boat, the Ocean?

Fischer: It's a retired Bering Sea crabber and it's been great to convert it from something that was designed to take from the ocean and convert it to something that's giving back to the ocean. It has a special cradle that goes over the side it's a super custom lift. You really won't find any other lift like it in the world. And that's what's allowing us to solve the mystery of these ocean giants. If you can get the shark over the lift, we can give a scientist 20 minutes of access to it, and then lower it back into the water.

OAP: What was the most intense or frightening thing you experienced while shooting this season?

Fischer: The most intense thing we ever had to deal with was the first shark we dealt with at the Farallon Islands [off the coast of San Francisco]. Captain Brett couldn't reach down through the shark's teeth to get the hook out, and he was forced to go through its gills. It tore up his arm.

And for the first time, we had observers on the boat. I feel like I failed that I didn't get them ready for what they were going to see. So it was a very tense, very unusual situation that could have affected our ability to finish the research.

McBride: I've had to do things like that with other fish a bass, trying to release something much smaller. So I knew it was possible for me to reach in there through such a big gill slit without hurting the shark. The barb had been ground down on the hook about 90 percent and the tip had been shortened and blunted so that it would be easy to get out. But I still couldn't remove the whole hook, so I cut the back off with bolt cutters. Seemed to me like the hook probably fell out after a few shakes of his head.

OAP: Were you scared?

McBride: My whole concern at the time was for the shark and for our operation. I was just completely concerned for the shark. My hands were getting pretty cut up. My forearms all the way up to my elbows had really deep cuts on them. The gills have an 80-grit sandpaper feel to them. But with the adrenaline rush going on I didn't really feel much.

The crazy part is it got infected so badly that it was a monthlong healing process. It was really painful. I had to hold my hands above my heart because the throbbing pain was just so bad.

Fischer: That's just the kind of commitment these guys have.

They put a temporary hold on us while we were out there, they wanted to see if the shark came up and if its satellite tag pinged in and that was in October of 2009. And since then that shark has traveled 7,000 miles [11,265 kilometers] and is in good condition, we're happy to report. It pinged in April 5 in the middle of the ocean between Hawaii and San Francisco.

We sat there and we waited because we had a lot invested in this research we fund it. We believe in what we're doing, and we believe that the few sharks we're handling will give us the data to save the rest.

OAP: What was the most interesting or most exciting part of this season for you?

Fischer: When we started out on this journey in 2007, there were multiple fundamental questions about the white shark. Every year, these sharks would show up at two aggregation sites they would come in the midsummer and leave in midwinter and no one knew where they went when they weren't there. And the females only came back every other year. The big mystery was, where are they breeding, where are they feeding and where are they giving birth, because that's when they need to be protected.

This year we had a 5,000-pound female shark named Amy guide us to a place no scientist ever thought sharks would be going, and that appears to be offering clues to where great white sharks give birth.

And that particular area is under heavy shark-fishing pressure. Now we know that sharks are going there to give birth, we can affect policy to give those baby sharks a chance to survive. And that's powerful. That's really the bigger picture here.

OAP: So where is it? Where do they go?

Fischer: You're going to have watch to see. Week eight.

Shark Men premieres on the National Geographic Channel on Sunday, April 10 at 9 p.m. ET. The first episode features McBride's attempt to remove the hook through the shark's gills.