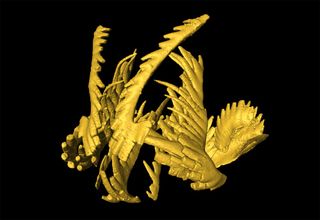 The origin of jaws remains largely an enigma. To solve this mystery, scientists analyze jawless vertebrates (animals with backbones) both living and fossil.

Investigators focused on extinct eel-like creatures known as conodonts, whose relationship with the vertebrate family tree is still a bit murky. Using X-rays of exceptionally well-preserved 250-million-year-old mouthparts of the conodont Novispathodus unearthed in southern China, they created 3-D models of how their mouths might have worked and compared this with research on other conodonts. [Image of 3-D mouth model]

The mouths that emerged might look monstrous by our standards. Apparently, most conodonts had two upper lips that each possessed a long, pointed, fang-like tooth. They also had a "tongue" of sorts that possessed a complicated set of spiny or comb-like teeth, an organ connected by pulley-like cartilage to two sets of muscles. In addition, its pharynx, or back of the throat, had two or more pairs of robust, sometimes molar-like, "teeth."

To eat, the creatures likely used their lips and "tongue" to grasp food. The "teeth" in their pharynxes then crushed or sliced up their meals, explained researcher Nicolas Goudemand, a paleontologist at the University of Zurich in Switzerland. [The Creatures of Cryptozoology]

As bizarre as this arrangement might sound, modern lampreys and hagfish have somewhat similar mouths, although they lack teeth in their pharynx, and their tongues have "teeth" made of horn as opposed to minerals. Actually, in this  regard, "conodonts are closer to us than lampreys are," Goudemand told LiveScience, as our teeth are also made using minerals. "They were probably also grown in a similar way."

These findings suggest conodonts are vertebrates, and potentially the ancestors of the first jawed vertebrates. Although jaws evolved much earlier than Novispathodus — sharks date back at least 200 million years before these specimens — jaws likely evolved from even older creatures with similar pulley-like cartilage systems and mineral teeth.

"The common ancestor of conodonts and lampreys — that is, some of the first vertebrates — must have had a similar pulley-like feeding mechanism," Goudemand said.

The scientists detailed their findings online today (May 9) in the Proceedings of the National Academy of Sciences.