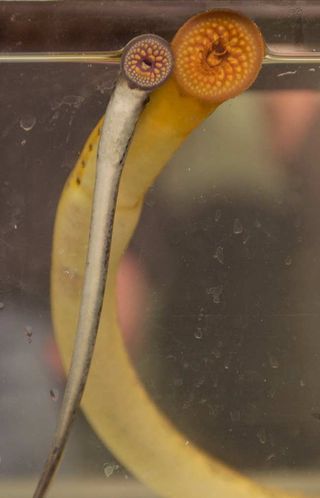 Two sea lampreys, which use sharp teeth to drain body fluids of fish. The sea lampreys resemble 18-inch eels, can live in both salt and fresh water and likely found their way into the Great Lakes via shipping channels. Photo by Daymon J Hartley

Alien sea lampreys have caused the extinction of three species of whitefish in the Great Lakes. With sharp teeth, they latch on to native fish and slowly suck the life out of them. The U.S. and Canadian governments together spend up to $15 million per year on lamprey control, including chemicals that may harm the environment.

A newly developed love potion may be better at wiping out this invasive creature.

Weiming Li, a professor of fisheries and wildlife at Michigan State University, found in 2002 the chemical that male lampreys use to attract females. Now his team has created a synthetic version of this pheromone. It can be used to attract spawning females and lure them into traps, to foil the mating process.

Pheromones, chemical scents used to attract a mate, are well-documented in the insect world and among some animals. It's not clear if humans use pheromones, despite longstanding speculation that we do.

Tiny concentrations of the synthetic pheromone component, called 3kPZS, was as effective as the pheromone release by males in attracting females over hundreds of meters, and wasn't affected by habitat conditions, the researchers found.

"The pheromone is expensive to synthesize," Li said, "but only a very small amount is needed for it to work successfully. It's very potent. Only a few hundred grams, less than a pound, would be used each year."

The synthetic pheromone also could be used to attract females for harvesting as a food fish. In France and Portugal, sea lamprey is considered a delicacy.

"The Great Lakes Fisheries Commission would like to deploy one new integrated pest management control method by 2010 as a milestone for its sea lamprey management program," Li said. "The commission considers regulating spawning and migrating behavior with pheromones the most promising control method for implementation. So we're excited about the possibilities."

Currently, lampreys are controlled mainly by adding TFN, a compound that kills the larval stage, to freshwater streams where lampreys spawn. But there are environmental concerns about adding the chemical to streams, as well as the possibility that lampreys could develop resistance to TFN.

Sea lampreys are about 18 inches long and resemble eels. They are ancient creatures, largely unchanged for millions years.

They can live in both salt and fresh water and likely found their way into the Great Lakes via shipping channels. They have no natural predators in the Great Lakes.

Parasitic lampreys attach themselves to other fish, such as salmon, trout and whitefish, and suck out the fish's body fluids. The lamprey's sucking disk and sharp teeth scar the host fish, killing many of them. Under some conditions, only one of seven fish attacked by a sea lamprey will survive.

"It made sense for us to focus on the sea lamprey," Li said. "It's a poster animal for invasive species — very destructive, very expensive to control effectively."

The research is published in the current issue of the Proceedings of the National Academy of Sciences. It was funded by the Great Lakes Fishery Commission, the National Science Foundation and the Michigan Agricultural Experiment Station.