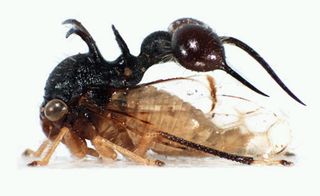 Treehoppers display an endless diversity of forms, most of which are conveyed by a bizzare structure called the helmet, an novel homologue to wings no longer involved in flight.
(Image: © Nicolas Gompel )

"We think this is an example of how evolution can work at a morphological level, by recycling a genetic program by expressing it in a new location on the body," said study researcher Benjamin Prud'homme, of the Institut de Biologie du Développement de Marseille-Luminy, in France. "It was the raw material for evolution to play with, to evolve into new shapes." [Image of helmeted insects]

Researchers hypothesize that the treehoppers, which emerged on Earth about 40 million years ago, use their headgear for camouflage. Some of it resembles debris or animal droppings, and one species even dons headgear that looks like an aggressive ant.

"We don't know the function of the helmet," Prud'homme told LiveScience. "To human eyes, they look like they mimic the environment in which the animal lives."

"It is quite remarkable — the helmets look very different from wings," Prud'homme said. "In fact, they aren't wings per se; they aren't used in flight."

Genes are expressed in all insects that normally stop development of wings (and other winglike features, such as the treehopper's helmet) in the first thoracic segment. In the treehopper, these genes are still active and expressed, so some other part of the wing-formation pathway must be defective, allowing the treehoppers to grow their helmets.

To fashion their helmets, the treehoppers had to first turn this wing-making machinery on in that body segment, after being unused for 250 million years. "It's a unique situation in winged insects," Prud'homme said.

Insect wings first appeared about 350 million years ago in primitive winged insects, which had wings on every segment. Over the next 100 million years, these wings were corralled into just the second and third thoracic segments and have stayed that way ever since.

Adding features to the insect body plan — the general blueprint of body parts on which all insects develop — is a very rare event. Gradually, some insects have lost wings all together, though losing features is much less complicated than adding them.