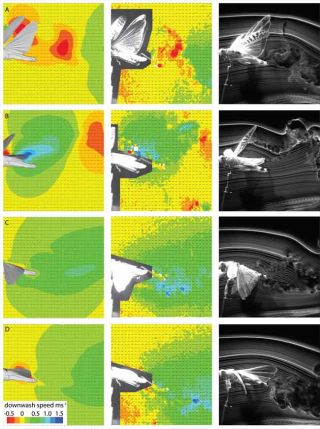 While most airplanes have relatively flat wings, nature seems to prefer a twist.

New studies find that insects' wings often deform during flight, and that the twisting, curving motion of their wings plays an important role in their flying process.

A team led by John Young of the University of New South Wales in Australia recently studied locusts to make one of the most accurate models yet of insect flight. They used high-speed digital cameras to photograph the wing motion of the bugs, and found that locust wings curve strongly during flight.

The researchers input their measurements into a three-dimensional computer simulation — the first to include wings' complex curves. Within the model, the researchers tested different scenarios and removed certain wing features to explore the aerodynamic effects.

The team found that twisting wings are much more efficient than flat wings.

"If you change from a flat-plane wing to a twisted wing, it requires 50 percent less power to generate the same lift, which is a huge savings," said study co-author Adrian Thomas of the University of Oxford in England.

The model revealed that curving wings are better able to create the right airflow while causing a minimum of drag downwards.

"The carefully-tuned shape the locusts have generates the lift without the costly drag," Thomas told LiveScience. The research is detailed in the Sept. 18 issue of the journal Science.

In a study published in May in the journal Experiments in Fluids, Mountcastle and his team members found that flexible wings are preferable to fixed wings for flight.

"We found substantial differences in the induced airflows," Mountcastle said in a phone interview. "Our results suggest that the flexible wings are doing a better job of transferring lift-favorable momentum."

Twisting wings seem to have an advantage when it comes to being able to adjust for changing, unsteady winds.

This type of research helps scientists understand how wing form and function evolved in insects. It could also help inventors trying to replicate nature's amazing feats.

"Engineers are looking to build micro airplanes that exploit flapping flight, and their major problem is getting sufficient power," Thomas said. "My guess is the right way forward for making flapping-wing aircraft is to have a look at what wind surfers and racing yacht designers do. They should make wings more closely modeled on sails than on aircraft wings."

Sails, he said, are able to deform and twist much like insect wings, and are a better model for how many animals fly than fixed airplane wings. If more flexibility is built into the micro aircraft wings, they might be able to better create the lift they need.