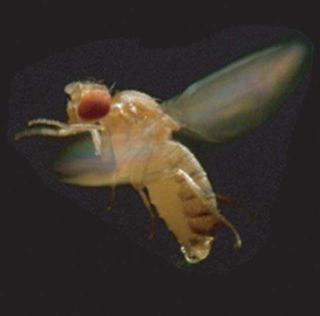 Tethered fly from the side.
(Image: © Steven Frye.)

Part of the scientific buzz about flying insects has to do with their amazing ability to turn their powerful flight muscles on and off so quickly.

"For an insect, it is too difficult to have an electrical signal go from the brain to the muscle 200 times per second," says Tom Irving of the Illinois Institute of Technology.

Instead - for many insects - the wing-moving muscles, which are located in the thorax, operate by something called stretch activation, wherein one set of muscles automatically fires when the contraction of the opposing muscle group causes it to stretch.

This internal feedback loop goes on without any nerve impulses from the brain.

"I'm not sure how it turns off," Irving admitted to LiveScience in a telephone interview.

But he and his collaborators have uncovered some of the molecular processes of stretch activation using X-ray images of fruit flies taking wing. The results could provide insight into the beating of heart muscles.

The molecular structure in a fly's muscle causes incoming X-rays to change direction, resulting in a distinctive pattern on an X-ray image.

For their project, Irving's team used the Advanced Photon Source at Argonne National Laboratory, which provides an X-ray beam millions of times more intense than those available in most other labs.

This beam - if left on - is powerful enough to "cook" the flies, so individual exposures had to be kept to about 0.3 milliseconds. Fried flies was not the intent. To build up a decent image, though, the scientists would need 150 of these short exposures.

The challenge, then, was to synchronize the flapping of the fly's wings with the timing of the shutter, so that separate exposures would coincide with the same point in the beat cycle. Such synchronization required a little bit of virtual reality for flies.

The first step was gluing each fly head to a tungsten wire, so they would remain at the exact focal point of the X-ray beam. In this configuration, a fly will beat its wings continuously for an hour or so before running out of energy.

"If its feet are not touching the ground, a fly will think it's flying," Irving said.

But getting them to fly was not enough. To control the flapping speed, Michael Dickinson of Caltech designed a "virtual-reality flight simulator" for flies.

"We had to fool the fruit fly into thinking it was moving," Irving said.

The flight simulator consisted of an array of light-emitting diodes, which flashed in such a way that the tethered insect thought it was flying through a tunnel.

The beat goes on

A fly, it turns out, will adjust the frequency of its wing beats to match what it believes to be its forward motion. By timing the opening of their shutter with the fly's frequency, the researchers were able to record eight separate time steps of a wing beat.

"We were actually seeing the movement of the molecules in a cycle," Irving said.

The data indicate previously unsuspected interactions of various proteins as the muscles stretch and contract. The implications may go beyond insect flight. "We might look for this mechanism in heart muscles," Irving said. "It opens up new questions for us."

Irving is quick to point out that the heart will not beat without a signal from the brain, but the processes in the fly's muscles could play some part in how heart muscles work. If so, it may be possible to genetically engineer fruit flies to mimic some kinds of heart problems.