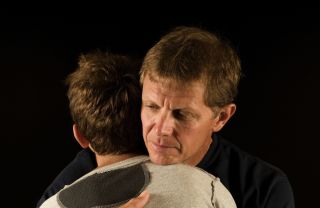 Parents of bullied children want to be there for their kids, but a child's victimization can leave moms and dads feeling lost as well.
(Image: © © Ejwhite | Dreamstime.com )

One evening two weeks ago, Nancy Anderson Dolan's 13-year-old son opened his laptop and yelled like he'd been struck. Dolan rushed to his side and saw what had appalled her child: An expletive-filled message from a child her son has known for years, threatening to hurt him.

"It was an odd experience, like kind of a home invasion, actually, because it was just so sudden and unexpected," Dolan, a counselor in Calgary, Alberta, told LiveScience. "It was freakish. You just couldn't wrap your mind around something like this happening."

Even now, after involving her son's school and helping him recover from the cyberbullying incident, Dolan finds herself on edge.

"We are having a pretty optimal response, but still that sense of not being able to keep my child safe is so pervasive," she said. "It strips away any facade you might have that you think you are able to protect your children."

Most research on bullying has focused on its effect on children, for the good reason that children bear the brunt of the suffering. But parent reports suggest that Dolan's emotional reaction isn't unusual. When a kid is bullied, many parents say they feel angry, frustrated and helpless. Their relationships with other adults in the community may crack as parents choose sides. In some cases, bullying strains the whole family, making it harder for parents to help end their child's torment. [The History of Human Aggression]

"What I always encourage parents to do is to have a measured, calm approach to the situation," Susan Swearer, a bullying expert and psychologist at the University of Nebraska-Lincoln, told LiveScience. "That's difficult to do, because it's upsetting, obviously, when your son or daughter comes home and they're upset."

Parental worries over bullying were in the national spotlight recently, with a "Good Morning America" feature on 7-year-old Samantha Shaw, who got cosmetic surgery to correct a minor ear deformity — largely, Shaw's mother Cami Roselle told GMA, to prevent her daughter from being bullied.

"I don't want her to be teased and bullied and then have her lash out and treat people the way she's being treated," Roselle said.

Kids do bully each other because of perceived differences, Swearer said, ranging from clothes to body shape to intelligence. But body modification may not protect kids from being taunted, she said. [Facts About Your Teen's Brain]

"The fact is, we are all different in some way from each other. That's one thing that makes humans so interesting," Swearer said. "Since kids bully others for a variety of reasons, I suspect that having plastic surgery will not stop the bullying."

A bully's choice of victims can come out of nowhere for parents. For Dolan, the bullying incident shook her perception of her tight community and her son's small private school. It saddened her younger son, who had previously looked up to one of the boys who'd sent the messages. And it raised the specter of her child getting physically harmed, either by the children who'd threatened him or by his own hand.

"A teacher who is a client came in that week and talked about a student of hers who committed suicide from bullying," Dolan said. "It really impacted me to have that come up during the same time."

"In the news every day, a poor, poor child is committing suicide over this, and you're thinking, 'Oh my gosh, will it get to that point?'" Newman said.

The bullying brought out a series of emotions, said Newman, who later co-authored a book on coping with bullying, "When Your Child is Being Bullied: Real Solutions for Families" (Vivisphere, 2011). At first, she was incredulous that her child could be the brunt of such cruelty. Then she became outraged, frustrated — and worried.

"During the day, I'd be sitting in a meeting with a client, and I'd be thinking, 'Who is doing what to him now?'" she said.

In the end, Newman and her husband sent her son to another school, where she says he is thriving. The rifts between their family and others in the community have also pushed the family to make a long-discussed decision to move to another Chicago suburb.

"Everybody needs a fresh start," Newman said. "You become so negative and anxious."

That anxiety can intensify when parents run up against unresponsive schools. Eric Bergman, a communication consultant in suburban Toronto, said he was disgusted when another girl at his daughter's middle school started psychologically bullying her with rumors and whisper campaigns. The middle school shut the bullying down, Bergman told LiveScience. But when both girls moved on to high school, the bullying became physical — and neither the school administration nor the local police would take action, Bergman said.

"It went from disgust to fear," he said. "And an utter feeling of helplessness, impotence. It was very scary."

While it can be hard to cope with the emotions bullying brings, Swearer encourages parents to focus on solutions for their child.

"Going in angry and yelling and screaming, which I have seen, does not help anybody," Swearer said. "Everybody just gets defensive."

Parents should realize that bullying is a complex social problem, and the situation may have been developing for some time, she said.

Parents can take steps to protect their children before bullying starts, said Rene Hackney, a school and developmental psychologist for Parenting Playgroups, which offers parent workshops in Alexandria, Va. Bullies often target kids who don't stand up for themselves, Hackney told LiveScience, so parents can teach their kids early how to express their emotions and assert themselves in social situations.

For example, parents might try reading a book such as "The Berenstain Bears and Too Much Teasing" (Random House, 1995) to their children, Hackney said.

"The idea is to read through and really talk about the characters in the story, ask if [the child] has ever felt that way," Hackney said.

Making sure the child has a wide range of play dates with different peer groups can also prevent bullying, Hackney said, because the more social connections a child has, the less likely they are to get picked on. In middle and high school, the focus shifts to making sure tweens and teens know they should report bullying when they see it.

"If bystanders just watch, it gives power to that aggressive child," Hackney said. "To curb the social aggression in the middle and high school years, it really takes the whole community."

If a child does report bullying, Hackney said, parents should take it seriously.

"Don't think of it as, 'They're always telling,'" she said. "You want to think, 'They're finally telling' … Once they do come to you, they've often been picked on for weeks."

No matter how upsetting that news, both Hackney and Swearer emphasize the need to stay collected for the child's sake.

"Generally, it's important to remain calm, collect the facts, remember there are two sides to every story and then go in with a solution-oriented, problem-solving approach," Swearer said. "How parents react to the bullying can make it worse or make it better."