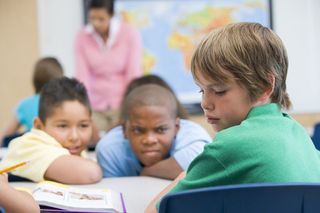 Bullies choose their victims wisely, targeting kids who are unpopular and less likely to be defended by their peers, a new study finds.

And in elementary school, which this study focused on, kids are only interested in what their same-gender peers think. So boys will target classmates who are not well-liked by other boys, regardless of what the girls think.

Past research has shown that gays and lesbians as well as those who are socially awkward are more likely to be victims of bullying.

The new finding that bullies are so strategic in their affairs means eradicating the behavior will take a savvy program, said lead researcher René Veenstra, professor of sociology at the University of Groningen. While the study was based in the Netherlands, Veenstra said there's no reason the results shouldn't apply to the United States and elsewhere.

The results, which are detailed in the March/April 2010 issue of the journal Child Development, have implications for reducing bullying. An estimated 15 percent of kids around the globe are victims of bullying which can lead to depression, anxiety, loneliness and other negative consequences, the researchers say.

Bullies also have grim outcomes, with research showing in the long-run they have more substance abuse problems and higher levels of delinquency, Veenstra said.

Who's who in the classroom

Veenstra and his colleagues had about 480 students, average age of 10.5 years, from 26 different Dutch elementary schools answer questionnaires about their classmates.

The students noted which kids were their friends, those they disliked and who bullied whom. For instance, students indicated whether they themselves or others were victims or instigators of different forms of bully behavior and victimization, such as: excluding or ignoring; calling names or laughing; hitting, kicking, or pinching; taking things; throwing things.

Bullies tended to target same-gender individuals who were rejected by and had low acceptance from their same-gender classmates. So when boys bully boys, it didn't matter whether girls approved or disapproved. The same went for girl bullies.

In that way the bullies could gain status by dominating other kids while also stay in the good graces of the in-group.

When they did taunt girls, boys chose victims who weren't well-liked by other boys, regardless of the victim's status among girls. Girls did the same in their bullying of boys. But there was one caveat. While male bullies were never rated low on acceptance by male or female peers, when girls bullied boys they were more rejected by both genders. The researchers aren't sure the reason for the gender difference.

Veenstra paints a picture of bullying as a strategic affair involving more than just the bully and victim. For instance, assistants help out the bully, while defendants help the victim, and bystanders stand on the sidelines.

"Bullies do it so strategically that if there is not a good program at the school nothing will change. They won't change their behavior by themselves, because it gives them a lot of advantages," he said. "You really need a good program that changes the attitude of all the kids in the classroom that makes clear to children that if they want the bully to stop they all have to be part, take joint action."

He added, "They have to understand if they assist or reinforce the bully or are just bystanders that is what drives the bullying."

Those who want to nip bullying behavior in the bud should also take gender into account.