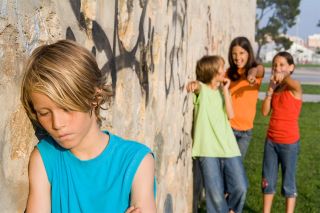 Popular kids — except those at the absolute top of the social ladder — are most likely to act aggressively toward other kids, a new study finds.

It isn't aggression that makes kids more popular. But becoming more popular makes kids more aggressive, said study author Bob Faris, a sociologist at the University of California, Davis — suggesting that those kids see tormenting others as a way to gain and cement status.

Faris and his co-author, Diane Felmlee, reviewed a study that followed eighth-, ninth- and 10th-graders in North Carolina over a year.

"For the most part, we find that status increases aggression," Faris told LiveScience.

"For some people, that will be a surprise. For other people who have grown up quoting 'Mean Girls,' it might be an 'Oh, duh' kind of revelation," he added, referring to the 2004 comedy about a clique of vicious but popular high school girls.

Many studies on kid aggression focus on the traits of bullies and their victims. These studies suggest that bullies often have troubled family lives and may be at higher risk for depression and other mental health disorders. Their victims are often unpopular.

Faris and Felmlee were interested not in individual traits, but in the social networks where bullying takes place. They used data from a long-term study of public school children in three counties in North Carolina.

About 3,700 students took part in the surveys that Faris and Felmlees analyzed. The surveys asked the students about their friendships as well as whom they picked on and who picked on them. The surveys' questions concerned both physical aggression and relationship aggression such as name-calling and ostracism.

After controlling for variables known to influence aggression — including dating activity, sports participation, grade-point average, socioeconomic status and physical development — the researchers found that students who were more central in their social networks were also more aggressive. Network centrality is a bit more complex than popularity: It means that a kid has not only a lot of friends, but a lot of friends who are also socially prominent. These school-age movers and shakers have a lot of social power among their peers, Faris said.

"We can't preclude the possibility that kids at the very top are just somehow really different, that they're incredibly nice and everybody loves them," Faris said. But other evidence suggests that these extremely popular kids are just secure enough in their positions that they don't need to be aggressive anymore, he said. Another, soon-to-be published study by Faris found that the more kids care about popularity, the more aggressive they are, suggesting it's a tendency toward social-climbing that triggers bullying behavior.

Other preliminary results suggest that while general aggression doesn't make kids more popular, picking on certain students does result in a popularity boost. Faris declined to discuss those results in detail before they're peer-reviewed.

The researchers also looked at how cross-gender friendships affect kids' aggression, and they found a complex story. On the whole, kids with many friends of the other gender are 16 percent less aggressive toward their same-gender peers, Faris said. Schools where boys and girls mix and mingle are also less aggressive on the whole. But in schools where mixed-gender friendships are rare, the few kids who do have them tend to be more aggressive, Faris said.

These cross-gender ambassadors (Faris calls them "gender bridges") are rare, Faris cautioned, so it's harder to be certain of the results. What may be happening, he said, is that gender bridge kids are proportionately more popular, thanks to their ability to connect the guys to the girls and vice versa.

"They're truly at the hub of social life at the school," Faris said.

Notably, two-thirds of the students in the studies said they never taunt or torment other students. That makes them bystanders, and interventions to educate these bystanders are important, Faris said, because their tacit approval allows bullies to thrive. Many anti-bullying researchers have developed and advocated programs to change school culture and encourage bystanders to condemn bullying.

"If you target the bystanders, you have a better chance of creating a school culture where aggression is discouraged rather than rewarded," Faris said.