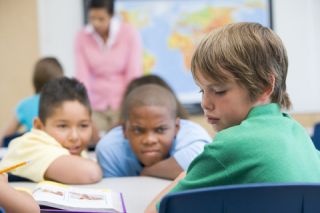 Kids can be cruel, for many reasons and most often on a fleeting basis. But bullies are tenacious in their brutal acts, and scientists have not had much luck figuring out why. A new study sought answers in a way no other study has, by asking bullies why they do it.

Bullies with the most hostility reported picking on kids because those kids were not good at sports. The most frequent bullying involved picking on students they perceived to be gay or lesbian, a result that agrees with another recent study on bullying.

While much more needs to be learned, the researchers now speculate that the beliefs and ideals of a particular community or society may influence bullying behavior.

The research seems to indicate bullying is about "social attitudes manifesting themselves in a very basic way within the school environment," said study researcher Ian Rivers of Brunel University in the United Kingdom. "So if the school really upholds sports, kids who are not good at sport are going to be victimized because they are not living up to the expectations of others."

Although the research was conducted in the U.K., the results likely apply to children in the United States as well, since issues of sporting and sexual orientation are common to both countries, Rivers said.

The study involved 666 students (ages 12 to 16) from 14 schools who had recently reported bullying others. The researchers compared the bullies with a group of 478 students who had not recently engaged in bullying.

Participants completed a questionnaire on bullying behavior, including a question on why they bullied others, followed by a list of options. Other surveys assessed students' mental health, substance abuse issues and demographic information.

Bullies were more likely than non-bullies to live in families without two biological parents, such as living in single parent families, living with extended family members or with foster parents. Such situations may mean bullies, in some cases, do not receive as much attention at home, the scientists said.

The study also found bullies were at high risk for alcohol and substance abuse . Fifty-nine percent of bullies said they had been offered alcohol in the last seven days compared with just 28.5 percent of non-bullies.

Bullies were also at higher risk for mental health problems, including depression, anxiety and hostility.

High hostility was associated with picking on students because they weren't good at schoolwork, they had certain possessions, or they were perceived as being gay or lesbian.

Some of these issues may tie in to societal views as well. Society places a lot of value on possessions and "therefore envy can become a motivator," Rivers said.

Communities might also be split on the issue of homosexuality, a topic some schools still have not properly address, Rivers said.

How bullies see themselves

Bullies tended to hold a negative view of themselves, suggesting they pick on others to feel better about themselves, and they may especially single out those who have trouble fitting in for other reasons.

"While [bullies] may well be very sensitive about any differences or any failings that they have, they may also be setting themselves up so that they victimize those who have failings that are more challenged in society, that are perhaps perceived to be more problematic, such as being gay, such as being poor at sports, such as not being good at school work," Rivers told LiveScience.

Rivers is also examining surveys from victims and witnesses of bullying, which he hopes will provide a bigger picture of the behavior.

"This is something that is really important for teachers and administrators to know: What are the hot spots, what are the issues that we need to address in terms of making schools safe," he said. "If the issue is that kids are being bullied because they're poor at sports, then maybe we take the school emphasis away from sports."

The study was presented in a poster session on Aug. 13 at the 118th Annual Convention of the American Psychological Association in San Diego.