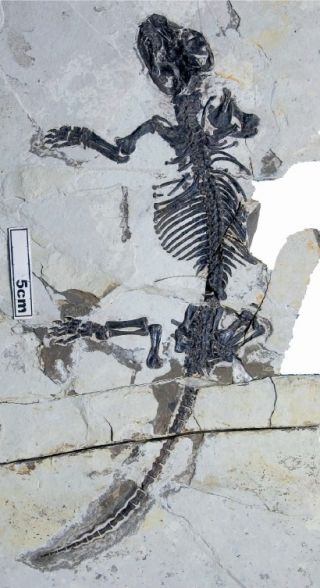 The well-preserved fossil of the ancient mammal Liaoconodon hui gives insight into the evolution of the mammalian middle ear.
(Image: © Jin Meng, AMNH)

What defines a mammal? Well, to some researchers it's a few tiny ear bones.

The fossil, called Liaoconodon hui, is a member of an early group of prehistoric mammals called the triconodonts, defined by their dental structures. It lived about 120 million years ago, during the Cretaceous Period. The find was published today (April 13) in the journal Nature.

"This fossil was beautifully preserved. And it fortunately preserved the delicate morphology of the ear ossicles [bones]," study researcher Jin Meng, of the American Museum of Natural History, said.  "It fits into a transitional stage. Some people consider it a mammal, some like a mammal-like reptile."

The researchers, led by Meng, termed the fossil's ear structure as "transitional mammalian middle ear" because it has a number of differences from the mammalian ear. The definitive mammalian ear is completely separated from the jaw, while this structure is still supported by a jaw-associated bone.

As sound waves hit the ear drum, these waves are transferred through three tiny bones, or ossicles. Each of these bones serves to amplify the sound wave, which is then sent as impulses to the brain. The changes to these bones over time have given mammals much better hearing (especially in air), made our ear more efficient, and allowed us to hear a wider range of sounds than our reptilian ancestors.

Three bones that originally formed the jaw hinge in pre-mammalian creatures changed size and shape, turning into the tiny ear bones of mammals. In this transitory mammal, the three ear bones "have completely detached from the lower jaw and are reduced in size, on other hand they are still attached to the ossified Meckel's cartilage," Meng said. The cartilage serves as a supporting structure for the detached ear bones.

"It's in contact with the ear bones, but not fused with it. It can vibrate without being affected by chewing," Meng said. "During evolution those ear bones used to have a dual function, but in this case the chewing function has been detached from the hearing function."

This piece of cartilage is present in mammals during development, but is reabsorbed into the body by birth. In other animals, the cartilage ossifies into bone and becomes an integral part of the jaw. A previous fossil, dubbed Yanoconondon allini by its discoverer Zhe-Xi Luo at the Carnegie Museum of Natural History in Pittsburgh, also contains a transitional middle ear. In this animal the middle ear bones were still attached to the jaw by Meckel's cartilage.

Meng believes that this fossil shows that the mammalian middle ear evolved separately for various groups of mammals. Luo believes that all mammals had a separated middle ear, and that this attached ear structure comes from a return to earlier structures still present during development.

"Aike all roads to Rome, both these paths lead to the same grand pattern of evolutionary homoplasies: In some lineages of mammals, the middle ear is detached from the jaw, in other mammals, the middle ear is still attached to the jaw," Luo, curator and associate director for research and collections at the Carnegie Museum, who wasn't involved in the study, said in an email to LiveScience.

"Honestly, I think the evidence is good for either argument," said Anne Weil, who wrote a News and Views article in the same issue. "We will continue to find more informative fossils. There will be more papers and more fossils. In ten years our views could change drastically."