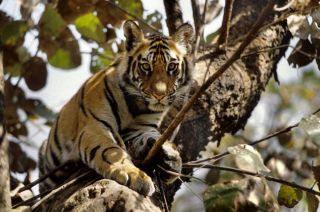 Endangered tigers are back in the spotlight at an international conference in India this week, where representatives from all 13 Asian countries where tigers still roam have gathered to work out the practicalities of saving a species from extinction.

The conference in New Delhi comes on the heels of the world's first tiger summit, hosted in November of last year by Russian Prime Minister Vladimir Putin.

The landmark meeting in St. Petersburg brought together high-level government officials from all Asian tiger range countries, along with conservation groups and donor nations, and produced the Global Tiger Recovery Program (GTRP), an international agreement aimed at, among other things, doubling today's wild tiger population — roughly 3,200 animals — by the year 2022. [See remaining and extinct tiger subspecies.]

How to accomplish such bold aims is the subject of this week's meeting, according to Mike Baltzer, head of conservation group WWF's Tigers Alive Initiative.

"St. Petersburg was, 'What we are going to do?'" Baltzer told OurAmazingPlanet. "This meeting is all about implementation — how are we going to do it?"

The answer is different in each Asian country where tigers live, and each country is presenting plans of action this week.

However, all tiger range countries will now at least have one thing in common: a monitoring system to count wild tigers and share data across all 13 nations. Baltzer called the development a major step forward.

The first day of the meeting was devoted to India's own work in tiger conservation, and the host country, which is home to roughly half the world's wild tigers, announced both good news and bad news.

First, the overall number of tigers across India has increased by about 225 animals, for a grand total of 1,706 tigers, officials said.

But while India saw an overall increase in wild tigers since its last count, in 2007, some tiger reserves saw a decrease in animals, almost entirely due to professional poaching.

Zain said the next step is to decrease demand for tiger parts on the consumer level, a task which will be different in each tiger range state.

"In the past you would put a cute picture of a tiger on a poster and tell everyone, 'Don't do this, don't do that,' but that's preaching to the converted," Zain said.

Zain said now it's a question of molding education and public awareness efforts to fit unique markets for tiger parts. In Indonesia, the demand for tiger skins for amulets is keeping smuggling alive, whereas in a place like Vietnam, tiger meat may be the biggest driver of illegal trade.

Both Baltzer and Zain, who are attending the meeting in New Delhi, say the enthusiasm of all tiger range countries for saving the endangered species is incredibly encouraging, but stressed that funding for tiger conservation is still scarce in some countries.

"As we are making these plans, tigers are dying," Zain said. "So there has to be a sense of urgency and these plans need to be implemented as quickly as possible. They need to be translated to boots on the ground."