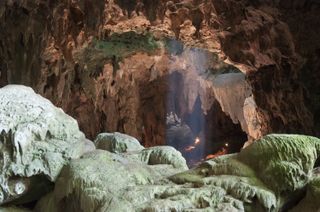 The ancient bones and teeth of a previously unknown human relative — one that was even smaller than the so-called Hobbit — have been discovered deep in a cave on an island in the Philippines.

The newfound species is named Homo luzonensis in honor of Luzon, the island where the mysterious beings lived during the late Pleistocene epoch, more than 50,000 years ago. At less than 4 feet (1.2 meters) tall, H. luzonensis is the second known dwarf human on record, the first being Homo floresiensis, also known as the Hobbit, whose remains were found on the Indonesian island of Flores in 2004.

But though H. luzonensis is short like the hobbit, it shares features with a number of other ancient human relatives; it has curved foot and finger bones like Australopithecus (a genus that includes the famous Lucy); premolars that have characteristics similar to those seen in Australopithecus, Homo habilis and Homo erectus; and small molars that look like those of modern humans, or Homo sapiens. [See Photos of the Newfound Ancient Human Relative Discovered in Philippines]

"These fossil elements show a combination of morphological [structural] features which [are] not seen in other species of the genus Homo, thus indicating a new species, which we named Homo luzonensis," study lead researcher Florent Détroit, a paleoanthropologist at the National Museum of Natural History in Paris, said in a statement the museum provided to reporters.

It took years to find the H. luzonensis remains. After scientists found a 67,000-year-old metatarsal, or toe bone, in Luzon's Callao Cave in 2007, they scheduled follow-up excavations in 2011 and 2015. In total, they uncovered 13 fossil bones and teeth that belonged to at least two adults and one child, including two hand bones, three foot bones, a thigh bone and seven teeth. One of these fossils dated to 50,000 years ago, indicating that H. luzonensis lived at the same time as other human lineages, including H. sapiens, Neanderthals, Denisovans and H. floresiensis, according to the study, which was published online today (April 10) in the journal Nature.

It's difficult to say what H. luzonensis looked like "because it is very difficult to tell from the elements we have," Détroit said. Given that the teeth are very small — even smaller than those of H. floresiensis — it's likely that the newfound species was small bodied, he said. Moreover, the curved toe and finger bones suggest that H. luzonensis was adept at climbing trees as well as walking upright on the ground. [Image Gallery: A Real-Life Hobbit (Homo Floresiensis)]

Granted, the genus Homo became a strict bipedalist (meaning it walked on two feet) about 2 million years ago, so "we are certainly not pretending that H. luzonensis was 'back to the trees,'" Détroit said. Rather, it's possible that this feature arose because H. luzonensis lived on an isolated island, he said.

"But it is then a very interesting question to address," Détroit said. "If they were strict bipedal like all members of the genus Homo, did such primitive features influence [or] change their bipedal gait or not? But it is still too early to answer, we need to work on that."

Countless other mysteries are left unresolved, including where H. luzonensis fits into the human family tree and how these little human relatives reached Luzon, which has been an island (no land bridge) for at least 2.6 million years. [Image Gallery: A Real-Life Hobbit | Homo Floresiensis]

Evidence of ancient animal butchery on Luzon dating to 700,000 years ago suggests that "some sort of Asian Homo erectus (maybe from China) successfully crossed the sea and settled on Luzon Island, where they subsequently underwent the effects of 'insular endemism,' which resulted into H. luzonensis," Détroit said. "But this is very speculative, I might be wrong on one (or several) aspects of this simple scenario. We will work on this in the future."

Détroit noted that the scientists were unable to extract any DNA from the bones, in part because the wet and warm climate of the Philippines doesn't help preserve genetic material. However, it's possible that proteins could be extracted from the remains, and those could shed light on the family tree question, the researchers said.

If anything, this previously unknown species shows the evolutionary complexity of hominins — bipedal primates that have increased brain size, which includes humans, our ancestors and our close evolutionary cousins, Détroit said.

The study reports on a "remarkable discovery" that will "no doubt ignite plenty of scientific debate over the coming weeks, months and years," Matthew Tocheri, Canada Research Chair in Human Origins and an associate professor of anthropology at Lakehead University in Ontario, Canada, who wasn't involved in the study, wrote in an accompanying perspective in the journal Nature.

For instance, anthropologists are always skeptical of newly discovered species that are based on just a few fossil specimens. But while the sample of remains of H. luzonensis "is not great," the authors of the new study present a compelling case that the dwarf is a new species, Huw Groucutt, group leader of the extreme events research group at the Max Planck Institute for Chemical Ecology in Jena, Germany, told Live Science in an email.

These findings show that the "study of human evolution has been based far too much on a few small and unusual areas (like Europe and South Africa)," Groucutt said. "This finding shows how many surprises remain. And how human evolution has led to all of these diverse forms of hominin."