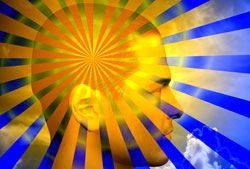 Scanning the mental activity of people with brain injuries is showing scientists that not all patients with the same condition should be treated the same way. Some patients may have higher cognitive function than their responses to doctors indicate, and some may have lower, according to a new study.

"We have to abandon the idea that we can rely on a bedside exam in our assessment of some severe brain injuries," researcher Nicholas Schiff, of Weill Cornell Medical College, said in a statement. [How Does the Brain Work?]

Schiff and other researchers used functional magnetic resonance imaging (fMRI) scans to test a spectrum of brain-injured patients — including those whose bedside tests showed them to be in a minimally conscious state; those who showed a limited ability to communicate by voice and gesture; and those suffering from "locked-in" syndrome, unable to move despite normal cognitive function. (Unlike paralysis, these patients can't even move their eyes or head as a result of injury to the brain, not spinal cord.)

The researchers gave the participants a specific pair of commands —  "Imagine swimming. … Now stop" — while their brains were being scanned. For those whose brain scans showed certain activity, suggesting they had been able to follow the commands, the researchers continued to scan their brain activity as they followed up with yes/no or multiple-choice questions.

Surprisingly, some of the patients able to communicate verbally or through gestures had trouble following the visual imagery command "Imagine swimming." Others who had no ability to communicate did well on the imagery test, suggesting they have more cognitive function than previously thought.

"This is a reality check, in essence, because there is a wide range of cognitive abilities in these patients, and the implications on the extreme ends of the spectrum are important," Schiff said. "Not all minimally conscious patients are the same, and not all patients with locked-in syndrome are the same."

Schiff urged people not to read too much into these preliminary studies of these patients' abilities to communicate.

"Although everyone wants to use a tool like this, fMRI is not yet capable of making clear measurements of cognitive performance," he said in a statement. "There will be a range of possible responses reflecting different capabilities in these patients that we have to further explore and understand."

Larger, multicenter trials of the imagery test are planned to better understand the mental abilities of these brain-injured patients.

The study was published in the Feb. 25 issue of the journal Brain.