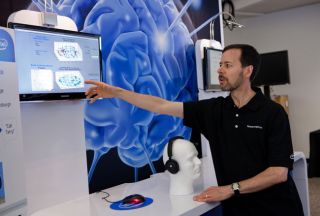 PROVIDENCE, R.I. – Getting paralyzed patients to walk or demonstrating virtual telepathy between humans and computers are possible future challenges for researchers, experts said during a brain symposium held here this month.

But receiving the funding to unlock the secrets of the human brain may prove equally daunting during a time of slow economic recovery, experts said. During the symposium hosted by Brown University on Oct. 13, representatives of a venture capital firm, a nonprofit foundation and a medical device company discussed how to forge ahead with neurotechnology.

"The current economy is focused on conserving resources, not investing in risk-taking," said Daniel O'Connell, a founding member and partner in NeuroVentures Capital.

Prize money could encourage companies to take the plunge despite the risks, according to Eileen Bartholomew, senior director of prize development at the X Prize Foundation. Winning such prizes would need clear goals, such as allowing paralyzed patients to "pick up a glass of water, or step out of a wheelchair," she added.

Brain disorders currently affect more than 100 million Americans and are responsible for more costs than any other area of health care, O'Connell said. He added that total costs of care for people with Alzheimer's disease alone are likely to skyrocket from $172 billion in 2010 to more than $1 trillion in 2050 – that is, if nothing is done to help prevent or cure the disease.

But pharmaceutical companies tend to focus on "what's easy and profitable" despite an interest in developing new drugs for brain disorders, O'Connell explained. And venture capitalists that might pony up private funding for new devices or therapies are also moving cautiously.

He also pointed to "risk-averse" government regulators at the Food and Drug Administration (FDA), which reviews new drugs and devices before they enter the market.

"When I say our veterans constitute our national interest and a unifying principle, I wish I could say Alzheimer's or Parkinson's would be enough," Kennedy said.

Racing for the prize

As for private industry, a reward worth $10 million might encourage companies to develop new neurotechnologies despite the difficulties, according to Bartholomew of the X Prize Foundation.

"Prize rewards outcome but also risk-taking," Bartholomew said. "It's not just about winning the prize itself, but also about the process of getting there."

She listed possible X Prizes, such as:

Smaller prizes known as X Challenges could also drive innovation for tackling issues such as Alzheimer's.

By contrast, the Virtual Telepathy X Prize remains more of a future hope rather than a near-term prospect.

Striking a "balance between audacity and attainability" has already worked for getting private space travel off the ground through the Ansari X Prize. The X Prize Foundation has also set up prizes to encourage development of super fuel-efficient cars and a private race to land a robot on the moon.

Looking to the future is great, but it should not come at the cost of ignoring today's technologies, said Timothy Denison, director of neuroengineering at the Minneapolis-based Medtronic, Inc., an independent medical technology company. He called for a series of milestones leading up to the grander visions.

"I don't want to miss an opportunity for us to use technology today," Denison cautioned. "Looking so far into the future is fine, but what can we also do to help [people] with bladder control issues?"

Some of those milestones may come in the form of X Challenges that each take a step toward a larger X Prize, Bartholomew suggested. Researchers could first develop ways to measure brain capacity in several X Challenges before they aim to boost learning abilities for the Neuroeducation X Prize, as one example.

"The X Challenges can break down barriers," Bartholomew said.