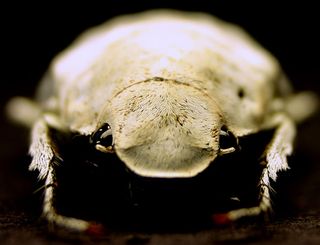 The whiteness comes from the scales that cover the beetleâ€™s body, head and legs.
(Image: © P. Vukusic-University of Exeter)

A beetle with scales as pale as a ghost could help engineers come up with super-thin, paper-white paints, new research shows.

The long, flat overlapping scales that cover the head, body and legs of the white Cyphochilus beetle, a common sugarcane pest in Southeast Asia, are brighter than milk, pearly teeth or most other white substances found in nature, says Pete Vukusic, an optical physicist at Exeter University in England.

These scales are extraordinarily thin, roughly half the width of a red blood cell. This makes them at least 100 times thinner than any whitening and brightening agents invented as yet.

And they could inspire advances that improve the paper we write on, the color of our teeth and possibly the brightness of lights and displays in the future, Vukusic said.

In recent years, many scientists have looked to nature for new engineering designs, developing such materials as adhesives based on geckos foot pads and easy-clean fibers inspired by tiny bumps on lotus leaves.

Vukusic decided to focus on color-manipulation and color-flow structures that nature developed, "since it surely must have come up with some really good ideas. We know structural color in butterflies dates back at least 50 million years," he told LiveScience.

Most color in animals often comes from pigments, which absorb specific wavelengths of light and reflect others. ?Other colors in animals come from minute structures they possess that make incoming wavelengths of light interact with each other, causing some to emerge weakened and others strengthened. Familiar examples of structural color are seen with soap bubbles and peacock feathers.

Vukusic explored nature for a structure that generated the color white since it is relatively uncommon in animals. The colors that creatures adopt often help protect them by serving as camouflage. "White backgrounds are not generally found in, say, savannahs," Vukusic said.

A simple Internet search helped Vukusic arrive at the Cyphochilus beetle. "The brilliant white of the beetle was just striking to me," he recalled. "I know images can be doctored, but it seemed as if this could be very special. So I just ordered a few for $1.50 each." He noted that the beetle's whiteness might have evolved to help it blend in with local white fungi.

In order to appear white, a substance has to scatter all colors of light randomly at the same time. Using electron microscopes, Vukusic and his colleagues found that the scales of the Cyphochilus beetle possess structures made of randomly oriented filaments.

The beetle's scales carefully balance the size of the filaments and spaces between them. This means these structures scatter light far more efficiently than, say, a milk tooth from collaborator Benny Hallam's son, enabling the scales to generate a brilliant white even when very thin--in this case, five millionths of a meter.

Vukusic, Hallam and their colleague Joe Noyes reported their findings in the latest issue of the journal Science.