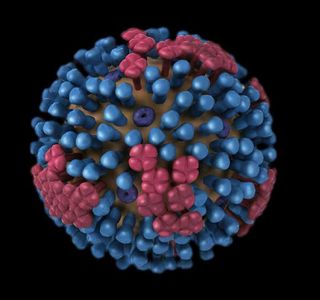 Another winter, another flu season. Theories of why seasonal flu outbreaks happen in the colder months in temperate climes have ranged from people staying cooped up in chilly weather to having weaker immune systems. Now a single culprit may explain it best: absolute humidity, or the amount of water vapor in the air. The drier the air, the better flu spreads.

Using absolute humidity, “we found that we could reproduce the seasonal cycle of influenza very nicely in basically the whole country,” says Shaman.

They also noticed a significant drop in humidity in the weeks before most outbreaks began.

“If you had a real snap of cold, dry air, it was typically increasing the likelihood that you would have an outbreak,” says Shaman. “It could potentially be used in the future to make some sort of flu forecast.”

Ruling Out Other Causes

So does this finally put all the other seasonal flu theories to rest?

Yes and no. When Shaman and his team examined other potential causes of seasonal flu fluctuations, such as the school calendar, they found that while they could be influential, absolute humidity was still the best explanation.

For instance, says Shaman, “I do think the school calendar has an effect. I do think it's very important when you mix populations and you bring people together. But I just don't think it's the dominant force at work here.”

Next, Shaman wants to investigate the role of geography in flu spread.

All this work could improve flu research, help manage contagion and even forecast seasonal outbreaks. Unfortunately, it doesn’t mean people can avoid the flu by using humidifiers.