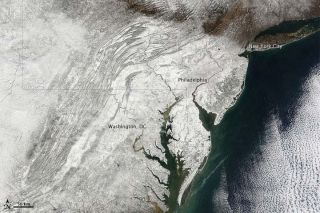 As the Northeast digs out from under the snow dumped by the Christmas Blizzard of 2010, we wondered how this storm stacked up against another big snowstorm from last winter.

The term "snowmageddon" and "snowpocalypse" originated with the first February blizzard of 2010, and stuck when President Obama used them. However, another severe snowstorm hit soon after on Feb. 9 and 10, and another struck later in the month. The nicknames are often used loosely to describe the winter weather for the month of February 2010.

Number of States that Declared a State of Emergency:

A state of emergency in Philadelphia forced the cancellation of an NFL Sunday night football game during the December storm. The postponement prompted Pennsylvania Gov. Ed Rendell to declare that delaying the game was further evidence of the "wussification of America."

The game was later played on a Tuesday night for the first time since 1946. The Minnesota Vikings upset the Philadelphia Eagles, 24-14.

After the second snowstorm in February, a whopping 68.1 percent of the country was blanketed by snow.

Number of Tech Media Network Staff Stranded in Far Away Cities by the Storm: