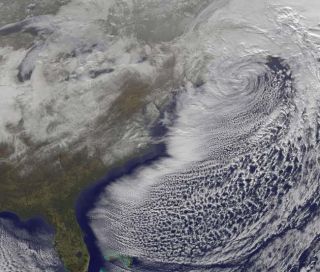 On Monday, Dec. 27 at 12:31 p.m. ET, the GOES-13 satellite captured this visible image of the powerful low pressure system that brought a blizzard to the Northeast and snow from Georgia to Maine. Some of the snowfall can be seen over South and North Carolina, Virginia, Maryland, Delaware, eastern Pennsylvania, New Jersey, and southeastern New York. The clouds of the low pressure system obscure New England in the image.
(Image: © NOAA/NASA GOES Project)

The great blizzard of December 2010 is winding down today (Dec. 27), and a new satellite image shows the powerful storm from space.

The powerful low-pressure system brought blizzard conditions from northern New Jersey to Maine over Christmas weekend. The GOES-13 satellite captured an image of the storm's center off the Massachusetts coast and also shows the snowfall left behind.

As of 1:30 p.m. EST, all blizzard warnings were canceled as the low has pulled much of its snow and rain away from land areas and into the North Atlantic Ocean, according to NASA. Winds behind the system are now causing more problems for residents along the U.S. East coast. Gusts were recorded as high as 80 mph.

Snowfall ranged from 1.5 inches in Atlanta to more than 1 foot in parts of New Jersey, New York and the New England states. [Snowfall Totals]