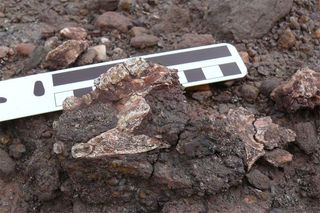 Scientists discovered the partial skull (cranium shown here) of a new primate species, Saadanius hijazensis, in Saudi Arabia. The specimen was found with the palate and teeth facing upward, embedded in an iron-rich clastic conglomerate in the middle part of the Shumaysi Formation.
(Image: © Iyad S. Zalmout, University of Michigan Museum of Paleontology, 2009.)

Our lineage might have diverged from our monkey relatives later than previously thought, a new primate fossil from Saudi Arabia now suggests.

One key step in understanding human evolution is pinning doing when the hominoid lineage, which includes apes and humans, diverged from the Old World monkeys.

"If we can refine our understanding of the date of split between hominoids and Old World monkeys and eventually get a better idea of what was happening with the ecology, climate and composition of co-occurring mammals at that time, we will learn about the conditions driving our own ultimate origins," researcher William Sanders, a paleontologist at the University of Michigan at Ann Arbor, told LiveScience.

Now researchers have revealed a partial skull roughly 29 million to 28 million years old of a previously unknown species of medium-sized primate that might have come on the scene just before our lineage split away from Old World monkeys.

When alive the primate likely resembled a New World monkey (a group that includes marmosets, tamarins, capuchins and other monkeys), sporting a tail and moving on all fours.

"It's not a monkey, it's not an ape — it's this intermediate, a precursor fossil for all apes and Old World monkeys," said researcher Iyad Zalmout, a paleontologist at the University of Michigan at Ann Arbor.

The fossil, unearthed in 2009 near the west coast of Saudi Arabia during a joint field expedition of the Saudi Geological Survey and University of Michigan, is dubbed Saadanius hijazensis. In Arabic, "saadan" collectively refers to apes and monkeys, while "Al Hijaz" refers to the region where the fossil was found.

The fossil had evidence of deep bite marks and possibly fatal puncture wounds on it. Back then, the area was a warm, lush forest very unlike most of present-day Saudi Arabia, and was populated by extinct mammals known as creodonts, carnivores generally more heavily built than living cats and canines that possessed large fangs capable of inflicting the damage seen in the new fossil skull. [Evolution's Most Extreme Mammals]

The fossil, which scientists said belonged to an adult male weighing about 33 to 44 pounds (15 to 20 kilograms), possessed features of the catarrhines, the common ancestor of hominoids and Old World monkeys, such as a tubular ectotympanic, a bone linked with the eardrum. These new findings hint the divergence between hominoids and Old World monkeys happened between 29 and 24 million years ago.

"Between 24 million and 29 million years ago, there's the beginning of the spreading of the Red Sea, and changes in temperature and sea level and climate, and new animals coming in from Europe and new vegetation from South Asia," Sanders said. "Now we can start looking at all these factors to better understand the evolutionary laboratory that drove the emergence of groups like our own."

Future research will focus on trying to find more of Saadanius, particularly the rest of the skeleton besides its skull.

"We'd like to know more about how it negotiated around the landscape," Sanders said.

The scientists detailed their findings in the July 15 issue of Nature.