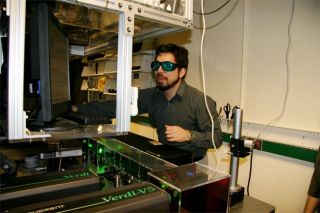 Ed Boyden, at an optics table where his lab is building a two-photon microscope.
(Image: © Paula Aguilera, MIT Media Lab.)

Ed Boyden studies the control mechanism behind neural circuits in order to understand how cognition and emotion arise, and also to enable systematic repair of intractable brain disorders such as epilepsy, Parkinson's disease, post-traumatic stress disorder and chronic pain. As the Benesse Career Development Professor at the MIT Media Lab, assistant professor of Biological Engineering and Brain and Cognitive Sciences at MIT, and leader of the Synthetic Neurobiology Group, Boyden and his colleagues invent new tools for controlling and observing the computations performed by brain circuits. Boyden has received numerous awards for his work, including the NIH Director's New Innovator Award and the Society for Neuroscience Research Award for Innovation in Neuroscience.  Boyden was also named to the "Top 35 Innovators Under the Age of 35" by Technology Review in 2006, his lab's work was selected to the Discovery Science Channel's "Top 5 Best Science Moments" in 2007, and he was selected for the "Top 20 Brains Under Age 40" by Discover Magazine in 2008.  He has launched an award-winning series of classes at MIT that teaches principles of neuroengineering. Learn more in a related press release, and read Boyden’s responses to the ScienceLives 10 Questions below.

What inspired you to choose this field of study? I wanted to invent new tools that enable us, and other scientists, to solve philosophically challenging problems, such as figuring out what a feeling is, or discovering how we are aware of our selves. I also wanted to invent new treatments for intractable disorders that destroy human health. Neuroengineering, a nascent field in which we develop methods for analyzing and engineering the circuits of the brain, is the perfect arena in which to tackle these twin challenges, since understanding the complexity of the brain will require many new tools, and there are so many clinical challenges — stroke, depression, epilepsy, chronic pain — that demand radically improved therapeutic approaches.

What is the best piece of advice you ever received? I have received a lot of good advice over the years, but the best was to figure out how I think and feel when going about solving difficult problems, so that I can approach problems in a fashion that is optimal for the way my mind works, in order to maximize my positive impact on the world.

What was your first scientific experiment as a child? As a young child, I did a lot of mathematics. I was fascinated by patterns that appeared spontaneously in complex systems, and spent countless hours analyzing patterns in series of numbers, writing computer programs to help when I ran out of analytical steam. I won first place in the mathematics division of the Texas State Science Fair when I was 13 for a project on pattern formation. A year later I worked in a chemistry lab at the University of North Texas, where the goal was to create life from scratch by putting inorganic materials in layered clays, and seeing if DNA would form spontaneously.  Obviously it didn't work, or you'd have heard about it!  But learning to tackle big challenges from an early age was important. These experiences gave me a deep appreciation of how science could be used to confront the big questions of human existence.

What is your favorite thing about being a scientist or researcher? Pretty much everything. I love getting to choose what big problems to take on, and then breaking them down into smaller pieces that we can solve. I love trying out new things, optimizing our luck to discover something really new. And I thrive on the day to day: mentoring students and postdoctoral fellows, designing experiments, analyzing data, writing papers and giving talks. It's all good.

What are the societal benefits of your research? Our current research is aimed at inventing new tools for controlling neural circuits in the brain, and using these tools to discover the principles of how best to control neural circuits in disease states, in order to correct the aberrant patterns of activity present in the brain in those states. These tools may directly enable new treatments for brain disorders in the long-term, but right away revealing principles of how to control neural circuits may provide foundational insights going forward on what kinds of pharmaceuticals or brain modulation strategies would be best for treating brain disorders while minimizing side effects. Given that disorders of the nervous system — addiction, chronic pain, stroke, depression — affect billions of people around the world, and the treatments are imperfect with present side effects, we hope to have a lot of societal benefit in the years to come.

Who has had the most influence on your thinking as a researcher? As an undergraduate at MIT I spent a lot of time learning physics and electrical engineering, and wondering how I could apply these disciplines to do pioneering things.  When the lab where I worked as an undergraduate got a large amount of money to undergo renovations, my undergraduate research advisor sent everyone to wherever they wanted to do research, and I went to Bell Labs where many engineers trying to solve brain circuits were working. I was hooked. So when I interviewed for graduate schools the next year, I kept asking everyone how a physical scientist could help with the understanding of biology. So reading about physical scientists who had a huge impact on biology — Max Delbruck, Seymour Benzer, Francis Crick, and many others — had a big influence on me at that time.

What about your field or being a scientist do you think would surprise people the most? Since there is always an infinite amount of information that we don't know, and an infinite number of things that we don't fully comprehend, there is therefore an infinite number of possible important scientific projects. Since we can only do a finite number of things in our lives, the human act of doing science is obligately an aesthetically-driven act. I spend a lot of time thinking about not just the impact, but about the beauty of what we're doing. A good scientific story has cliffhangers, surprise endings and drama. The high school I attended had a fairly intensive training in literary criticism, and I credit that with helping me in thinking about this aspect of scientific beauty.

If you could only rescue one thing from your burning office or lab, what would it be? That's an easy one. My laptop. It is my brain co-processor.

What music do you play most often in your lab or car? I listen to a lot of Bach and Mozart when my mind is operating in a logical or imaginative fashion, and electronic music or techno when it's time to crank out results. But in the car, I pretty much only listen to NPR.