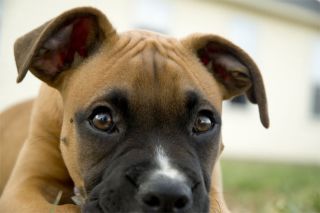 About six million dogs are diagnosed with cancer in the United States each year. A growing field called comparative oncology studies these naturally arising tumors in pets to learn more about human cancers.
(Image: © stock.xchng)

An unusual type of tumor in dogs is contagious — it can be passed from animal to animal, usually during mating. Now a study shows how this sexually transmitted cancer may work: Cancer cells can rejuvenate themselves by stealing the mitochondria, or the cellular "powerhouses," of the animals they infect.

"I think it’s a really new and exciting discovery about how cancer might evolve to adapt to its environment," said Elizabeth Murchison, of the Wellcome Trust Sanger Institute in Hinxton, England, who has researched transmissible cancers but was not involved in the new study.

The research raises questions about how exactly this transfer happens and whether it might also occur in human cancer cells, Murchison said.

The study by Clare Rebbeck of Cold Spring Harbor Laboratory in New York and fellow researchers  will be published tomorrow (Jan. 21) in the journal Science.

The cancer, which is known as canine transmissible venereal tumor (CVTV) and  threatens wolves and coyotes as well as dogs, probably originated some 10,000 years ago, the researchers said. It is just one of two cancers known to be contagious. The other, which affects Tasmanian devils, is called devil facial tumor disease.

Researchers sequenced the genes of CVTV samples from around the world. They sequenced both the nuclear DNA ― the genetic material in the cell's nucleus that dogs inherit from both their parents ― and the DNA in the mitochondria that are passed down only from the mother.

The mitochondrial DNA displayed a much higher mutation rate than the researchers expected.

This key finding indicated the tumor cells were acquiring new mitochondria from cells of each dog they infected. Previously, scientists had seen the transfer of mitochondria from one cell to another in a lab dish, but never in a living animal, Rebbeck told MyHealthNewsDaily.

"We've shown that this can occur in a natural environment, not just in a cell culture," Rebbeck said.

However, the researchers can't say how often this transfer occurs. They know it does not happen in every case of CVTV, and perhaps it will occur only two or three times during  a cancer's evolution, Rebbeck said.

Can human cancers do this?

Murchison said researchers should still try to look for any differences.

However, Rebbeck said human cancer cells ― unlike CTVT cells, which keep living as they are passed from animal to animal ― are only as old as the person they're in. So it's possible human cancer doesn’t have enough time for such a transfer, she said.

Pass it on: Cells of a contagious dog cancer can rejuvenate themselves by capturing the mitochondria of the cells of its host.

In Parkinson's Disease Patients, Brain Cells Lose Their 'Powerhouses'Estrogen May Push Some Cells into Cancerous StateHow Cells Can Ward Off Cancer-Causing Virus