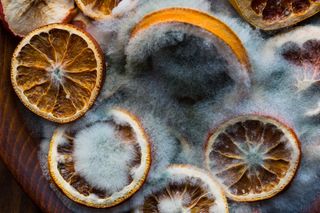 This moldy fruit is fuzzier than a chinchilla.
(Image: © Shutterstock)

The green, furry tufts of mold that pop up on bread and cheddar cheese aren't very appetizing. Their mere presence raises the questions: Why is mold so fuzzy, and is this fuzz dangerous?

The short answer to the first question is that fuzz is a sign that the mold is getting ready to reproduce.

"Fuzzy molds are billions of microscopic spores waiting to be carried away to a new environment," Megan Biango-Daniels, a mycologist and postdoctoral researcher at Tufts University, told Live Science.

Related: Is It Safe to Cut Off the Mold and Eat the Rest?

When you see green mold on bread or dusty white fungus on a forgotten tangerine, you're witnessing an important moment in the mold's life cycle. It's the moment when the mold is preparing to send genetic copies of itself out into the world in hopes that a few will find a home where they can establish themselves, make an honest living digesting something nutritious and propagate offspring of their own.

Molds reproduce by creating large numbers of reproductive cells called spores. Spores are similar to seeds in some ways, but they don't contain the food reserves that seeds can rely on while they germinate. Spores generally need more favorable conditions before they advance to their next life stage.

"When you look at mold, you're looking at the spores themselves," which are often green or black, Biango-Daniels said.

"Molds need to be fuzzy because they need to be picked up and carried away on the breeze," she said, "like microscopic dandelions."

Which brings us to the second question: Are these fluffy filaments dangerous? No, almost never. In fact, scientists are beginning to appreciate the ecological importance of molds and other fungi, such as mushrooms and yeasts.

"It has been estimated that there are around 2.2 to 3.8 million species of fungi," said Susana Gonçalves, a fungal ecologist and conservationist at the University of Coimbra in Portugal. The public tends to associate fungi with famine (such as the potato famine), disease (including fungal superbugs resistant to major antimicrobial medications) and sudden death (from eating poisonous mushrooms, but only a few species cause problems, and that only happens in specific contexts, she said.

For instance, some molds that grow on food produce toxic metabolites known as mycotoxins, which can sicken people, particularly those with weakened immune systems, according to the Food and Drug Administration. Moreover, some molds and yeasts can cause allergic reactions or infections, as they did to one man in Japan who had an allergy to moldy onion peels.

Most of the problems fungi cause, however, happen when humans carry them outside their native range, according to Gonçalves. For example, the spread of the fungal pathogen Batrachochytrium dendrobatidis from its native range somewhere in East Asia is contributing to the global decline in amphibian biodiversity.

In many cases, molds can actually help people because these decomposers are ubiquitous in nature and essential in food preparation. Beer, wine, cheese and sourdough bread are obvious examples of foods that humans partner with fungi to prepare, but they aren't the only fungus among us. Fungi also perform important chemical transformations that convert seeds and fruit pulp into coffee beans and cocoa beans.

But what should you do with that moldy cheddar you discovered in the back of your refrigerator? Can you scrape off the green and still enjoy the cheese?

"The mold may not be your biggest problem— it's just what you can see," Biango-Daniels said. The bacteria and viruses that cause food-borne illnesses are too small to see, so if food is molding in your fridge, that's a sign it's been there too long.

If you open the breadbox or crisper drawer and come across mold on your favorite snack that should be fungus free, Biango-Daniels suggests you pass, "not because it's dangerous, but because it isn't delicious."