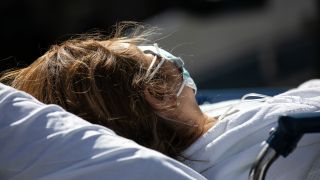 New York is being hit the hardest by the novel coronavirus spreading across the U.S., with more cases and more related deaths per capita than any other state.

As of Monday (April 13), New York's death rate linked to COVID-19 was 513 deaths per million people, compared with California's 17 deaths per million. With more than 70% of the state's related deaths being reported in New York City, it begs the question: Is there something about the city's five boroughs that is boosting transmission and fatalities?

Yes and no, experts say.

Part of the answer comes down to simple math. Studies of the viral genome have shown that whereas California had about eight initial introductions, mainly from Asia, dozens of people (up to 100) brought the virus into New York, mainly from Europe. Each of those introductions creates its own "chain of transmission," passing the virus to individuals who then, in turn, pass it to others and so forth and so forth.

In addition, one of those individuals in New York — a man in New Rochelle just north of the city — happened to be what is called a superspreader; for whatever reason, whether immunological, social or biological, a superspreader can infect many more people than expected for a particular pathogen. In fact, the virus was passed from this New Rochelle man to more than 100 others, said George Rutherford, professor of epidemiology and biostatistics at the University of California, San Francisco (UCSF).

The result is a huge initial number of people infected in the city. That's a problem when it comes to a health-care system not set up for pandemic conditions. A study out of China published online ahead of a print publication in the journal Emerging Infectious Diseases showed that within China, the provinces with the most cases also had the highest death rates and within Hubei province, where Wuhan is located, the cities with the highest case numbers also had the highest death rates.

"As the hospital systems get overwhelmed the mortality rate goes up proportionately," Rutherford told Live Science.

Compounding the magnitude of these chains of transmission in New York City is the timing of social-distancing measures.

When epidemiologists estimate the time of the first case of the coronavirus, they go back 3 weeks from the first related death — on average, it takes about that long from initial coronavirus symptoms to death for those individuals who die from SARS-CoV-2, he said. With that in mind, the first case in the Bay Area would have occurred just two weeks before stay-at-home orders were put into place, he said.

Compare that with Los Angeles and New York City, he said, cities that implemented their stay-at-home orders 4 weeks after the first estimated introductions of the virus in each, respectively.

Two weeks may not sound significant, but the novel coronavirus is thought to have a basic reproduction number, or R0 (R-nought), of 2 to 3, meaning that each infected person will, on average, infect two to three others with the virus. Given that many people are infectious before they show symptoms, or don't show symptoms at all, without social distancing in place, a lot of people who are infected may pass the virus onto others they have contact with over those two weeks.

The former head of the Centers for Disease Control and Prevention (CDC), Dr. Thomas R. Frieden told The New York Times that had New York, including the city, adopted social-distancing measures a week or two earlier, the death toll there could have been 50% to 80% lower.

"Flu was coming down, and then you saw this new ominous spike. And it was COVID. And it was spreading widely in New York City before anyone knew it," Frieden, who is also the former commissioner of the city's health department, told the Times. "You have to move really fast. Hours and days. Not weeks. Once it gets a head of steam, there is no way to stop it."

New York City is the densest metropolitan area in the U.S. with populations above 100,000. With such close quarters, it seems likely that a virus would spread faster there compared with a rural or even a less-dense city. But when Rutherford looked at counties and boroughs within the NYC metro area, there wasn't a trend toward more cases and deaths as density increased. (Whereas tightly-packed Manhattan has 730 cases per 100,000 people, Staten Island has reported about 1,644 cases per 100,000 people, according to the NYC department of health.)

One idea to explain this seeming anomaly, is that “type of density” may be more important in COVID-19 dynamics than absolute density, Richard Florida, a professor of Economic Analysis and Policy at the University of Toronto wrote in an article on CityLab (a news site he co-founded).

"There is a huge difference between rich dense places, where people can shelter in place, work remotely, and have all of their food and other needs delivered to them, and poor dense places, which push people out onto the streets, into stores and onto crowded transit with one another," Florida wrote on CityLab, adding "COVID-19 is hitting hardest not in uber-dense Manhattan but in the less-dense outer boroughs, like the Bronx, Queens, and even far less dense Staten Island."

The coronavirus is also laying bare health-care disparities that have long simmered in the U.S., predominantly those involving race.

Blacks, in particular, are seeing unequal impacts from COVID-19. Not all state and local governments are reporting racial data linked to COVID-19 cases and related deaths. But the Washington Post did an analysis of areas where data is available, finding that counties that are majority black, or African American, have three times the rate of infections and nearly six times the death rate for COVID-19 cases than counties that are majority whites. Even in areas with majority whites, blacks often make up a disproportionate number of deaths from COVID-19. For instance, The Post reported, blacks account for just 26% of the population in Wisconsin's largest city, Milwaukee County, but account for 70% of those who have died from COVID-19 in the country. A similar scenario plays out in Louisiana, the Post found, where blacks make up 32% of the population but 70% of the COVID-19-related deaths in the state.

About 22% of New York City residents are blacks, though 28% of COVID-19 fatalities in the city are occurring in that population, according to the state department of health; that's compared with San Francisco where blacks account for 5% of the population. Data on how this population has fared in San Francisco is still not complete, with a high percentage of unknowns, though as of now 5% of cases have been reported in blacks or African Americans. Rutherford suspects race could play a role in explaining the high death rate in New York City.

That the pandemic is hitting black communities so hard, encapsulates persistent and ingrained discrimination in the U.S., The Conversation reported.

"It is evidence of centuries of segregation and discrimination that have disproportionately placed people of color in communities without access to health care, with degraded and crowded living conditions and a lack of basic opportunities for health and wellness," Grace Noppert, an epidemiologist at the University of Carolina Chapel Hill, wrote on The Conversation.

Illustrating the prominence of the issue, the U.S. surgeon general, Dr. Jerome Adams who is himself black, said: "I've shared myself personally that I have high blood pressure, that I have heart disease and spent a week in the [intensive care unit] due to a heart condition, that I actually have asthma and I'm prediabetic, and so I represent that legacy of growing up poor and black in America," the Post reported.

Some of the blame for sky-high COVID-19 numbers in New York City may also lie with testing. There's a chance that with so many individuals infected in the city, the still-limited testing is focusing on the very-symptomatic people, Rutherford said, whereas California testing may be catching milder cases of the disease. At UCSF where Rutherford works, he said, about 4% of the tests are coming back positive.

Related: New York has been crushed by COVID-19. Will other US cities be spared?

A note sent by the New York City health department on March 20 advised health care professionals to conduct COVID-19 tests only on individuals who required hospitalization. "Persons with COVID-like illness not requiring hospitalization should be instructed to stay home. It is safer for the patients and health care workers and testing does not currently change clinical management or recommendations about staying home," the advisory said.