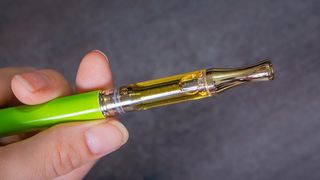 After weeks of searching for the cause of a mysterious outbreak of vaping-related lung illnesses across the U.S., health officials now say that THC-containing products may play an important role in these illnesses.

Today (Sept. 27), officials from the Centers for Disease Control and Prevention (CDC) released a new report on the outbreak showing that more than three-quarters of patients nationwide reported using vaping products containing THC, the active ingredient in marijuana.

A second report, which focused on patients in Illinois and Wisconsin, similarly found that the vast majority of the individuals reported using THC-containing vaping products. In particular, they reported using vaping cartridges that were "prefilled" with THC, which means the cartridges were already filled and packaged before the user obtained them.

What's more, most of the patients reported obtaining the vaping products from informal sources, such as off the street or from friends or a dealer.

Still, officials stressed that they don't know for sure what's causing the outbreak, saying they can't rule out non-THC-containing products as possible risks.

So far, the outbreak, which was first identified in July, has sickened more than 800 people in 46 states, according to the CDC. Of these, 12 people have died from vaping-related illnesses.

Patients reported symptoms such as shortness of breath, cough and chest pain, and some reported nausea, vomiting, fever and weight loss. Most of the illnesses have been serious, with the vast majority requiring admission to the hospital and many requiring treatment in the intensive care unit.

For one of the new reports, published today in the CDC journal Morbidity and Mortality Weekly Report (MMWR), researchers analyzed information from 514 patients across the U.S. They found that 77% of patients reported using vaping products containing THC or both THC and nicotine in the month before their symptoms started. Only a small portion of patients, 16%, reported using exclusively nicotine-containing e-cigarettes.

For the second report, also published today in MMWR, state health officials in Illinois and Wisconsin conducted detailed interviews with 86 patients in the two states. In those interviews, 87% of patients reported using vaping products containing THC, and of these, nearly all (96%) were in the form of packaged, prefilled vaping cartridges.

Overall, patients reported using 87 different brands of e-cigarette products. Although no single brand was reported by all patients, two-thirds (66%) of patients reported using a brand called Dank Vapes, a black-market "brand" of vaping products. Dank Vapes doesn't appear to be a single company, but rather a branded packing used by sellers of unregulated vaping products, according to Inverse.

Officials also stressed that they don't know the exact substance causing these illnesses. Previous reports said that a substance known as vitamin E acetate, an oil derived from vitamin E, had been found in some product samples taken from patients. In addition, an analysis commissioned by NBC News found another substance, a pesticide called myclobutanil, in 10 THC vaping cartridges obtained from unlicensed dealers. This pesticide can convert into the chemical hydrogen cyanide when burned, NBC News reported.

While the investigation of the outbreak is ongoing, the CDC recommends that people consider refraining from using e-cigarette products, particularly those that contain THC.