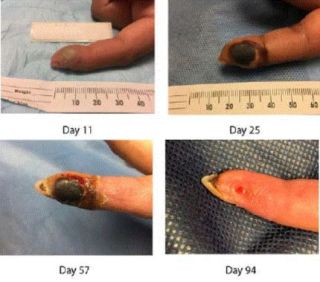 A lab worker became infected with a smallpox-related virus, known as the vaccinia virus, after she accidentally stuck her finger with a needle. Above, images of the patient's wound in the days and months after the accident. It eventually healed more than three months later.
(Image: © Whitehouse ER, et al. MMWR 2019/CDC)

A lab worker in San Diego became infected with a smallpox-related virus, known as the vaccinia virus, after she accidentally stuck her finger with a needle, according to a new report.

The infection caused the tip of the woman's finger to swell and turn black. Her case is unique because it marks the first time that doctors have used tecovirimat — a recently approved drug for smallpox — to treat a laboratory-acquired infection with vaccinia virus, the report said.

Vaccinia virus is similar to the   smallpox virus, also called the variola virus. However,  vaccinia is less harmful and doesn't cause smallpox. Even so, vaccinia is the virus used to make the smallpox vaccine. A global vaccination effort involving this vaccine led to the eradication of smallpox from the world in 1980. Though the vaccine isn't used routinely these days, doctors give it to people who are at risk of exposure to smallpox or similar viruses, such as scientists who work with vaccinia virus. (In research settings, vaccinia virus can be used as a delivery tool for gene or cancer therapies.)

In the case described in the report, the 26-year-old lab worker unintentionally stuck herself with the needle while performing an experiment that required her to inject mice with  vaccinia virus, according to the report, which is published today (Oct. 25) in the journal Morbidity and Mortality Weekly Report, put out by the Centers for Disease Control and Prevention (CDC).

The worker immediately rinsed her finger with water for 15 minutes, told her supervisors about the accident and went to the emergency room.

Although the lab worker was offered the smallpox vaccine before she started her work with vaccinia, she declined the vaccination.

It's important to note that the smallpox vaccine comes with more side effects than most vaccines people routinely get today. That's because, unlike most vaccines, which use weakened or killed viruses, the smallpox vaccine contains live vaccinia virus, according to the CDC. Within a few days of getting the vaccine, people are expected to develop a red and itchy lesion at the vaccination site. After that, the lesion turns into a large, pus-filled blister. While the vaccination site heals, people need to keep the site covered with a bandage that needs changing about every three days. Eventually, a scab forms over the blister and falls off, leaving a small scar, the CDC says. The whole healing process takes about three weeks.

Despite this uncomfortable side effect, the vaccine has a very low risk of serious complications. In contrast, an accidental injection with  vaccinia virus during lab work can result in serious wound infections that may require hospitalization, the report said.

About 10 days after the accident, the lab worker developed swelling and a lesion where the needle pricked her finger. Later, she developed a fever, and the swelling worsened. Doctors were concerned that she could develop "compartment syndrome," a serious condition in which there is excessive pressure inside a muscle.

Twelve days after the lab worker's accident, doctors decided to treat her with a 14-day course of tecovirimat, along with a single dose of vaccinia immune globulin, which consists of antibodies derived from people already vaccinated against the disease. The woman also received antibiotics to prevent a bacterial infection of her wound.

Within 48 hours of treatment, her fever went away, and the pain and swelling in her finger decreased, the report said. Still, areas of necrotic (dead) tissue on her finger didn't completely heal for more than three months, and she couldn't go to work during that time.

When asked why she didn't initially get the smallpox vaccine, the lab worker reported that, at the time, she "did not appreciate the extent of infection that could occur" with the vaccinia virus, the report said. In addition, she thought it would be challenging to manage the lesion at the vaccination site and worried about potential side effects.

The report shows that, in this particular case, tecovirimat was safely used to treat an infection with vaccinia virus, the authors wrote. However, because this was just a single case, it's unclear whether the drug would be warranted for other infections with that virus, they said.

In the United States, the CDC's Advisory Committee on Immunization Practices recommends that people get the smallpox vaccine if they work with vaccinia virus, unless there is a medical reason why they can't get vaccinated.