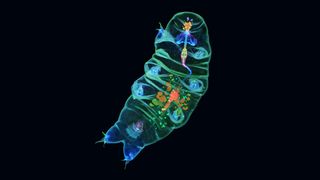 An image of a tardigrade with a psychedelic light show in its guts took home a top prize in an international photo competition. Inside the microscopic and endearingly tubby "water bear," tiny internal and external structures are illuminated in brilliant fluorescent colors that glow like a disco dance floor.

The photo was captured by Tagide deCarvalho, manager of the Keith Porter Imaging Facility (KPIF) at the University of Maryland, Baltimore County, and it was a regional winner in the 2019 Olympus Image of the Year Award, contest representatives said in a statement.

Every year, the competition awards "the best in life science imaging worldwide," celebrating images that combine visual impact and artistic beauty while also demonstrating the photographer's proficiency with microscopy, according to the statement.

"I knew the moment I saw this colorful specimen that it was going to be a remarkable image," deCarvalho said. "I love sharing the fascinating things I see in the microscope with other people."

Peer at a tardigrade through a microscope and you won't see much color, as these tiny creatures are mostly transparent. However, multiple fluorescent stains helped deCarvalho create an image that was not only infused with color, but also highlighted the tardigrade's organs, she said in a statement.

"I'm excited about this image because the fluorescent dyes I used allow you to see the tardigrade digestive tract, including the mouthparts and stomach filled with food," she explained.

While the tardigrade took home the top regional prize for the Americas, the contest's pick for Global Image of the Year went to an image that was even more colorful: a fluorescent-stained photo of a mouse brain slice, captured by Ainara Pintor, a doctoral candidate in biomedicine and molecular biology at the Basque Center for Biophysics in Spain.

"There are over 70 million neurons in a mouse brain," Pintor said in a statement. "This is an example of what we can observe in the hippocampus of a single brain slice." In the image, neurons are green, cell nuclei show up as blue, and fat-associated proteins are red, according to a photo description.

Other winning images of the year portray: a wasp's ovary and eggs; crystals in a beetle's wing case; fluorescent flower buds; and a magnified view of a green opal that resembles an aerial perspective of ocean waves crashing on a rocky coastline.

You can see all of the winners on the Olympus Image of the Year 2019 website.