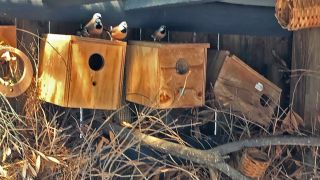 A primary school in Australia is breeding endangered finches — but although the program is bringing awareness to the birds' plight, it won't save them, according to the Australian Broadcasting Corporation (ABC).

The southern subspecies of the black-throated finch, called Poephila cincta cincta, is native to north-east Australia. It is thought to be extinct in New South Wales, and only an estimated 1,000 are left in the wild in Queensland, according to the ABC. But inside the classroom, they're thriving.

Brett Murphy, a Science, Technology, Education and Math (STEM) teacher at the Belgian Gardens State School in Australia, created the breeding program seven years ago and, with the help of his students, has been successfully breeding the finches for the past six years.

Related: In Images: 100 Most Threatened Species

In the breeding program, the team now cares for 120 finches, which includes the black-throated finch (Poephila cincta) and other species, such as the Gouldian finch (Erythrura gouldiae). The program also breeds other types of birds, including the golden-shouldered parrot (Psephotus chrysopterygius), according to the ABC.

Students take care of these animals daily, feeding them and making observations of their health. But while the breeding program is useful for raising awareness and appreciation, it will not save the finches out in the wild, Tony Grice, a member of the Federal Black-Throated Finch Recovery Team, told the ABC.

The main threat to the species is habitat loss, he said. These finches thrive in open, grassy woodlands with water nearby. "Some of that loss is historical, and some, more recently, is loss of the woodlands it prefers to live in and degradation of those woodlands in various ways," Grice said. Breeding birds in captivity won't provide that habitat.

What's more, birds that are captive undergo genetic changes and may not be able to survive in the wild, he said. Even so, Murphy told the ABC that if the numbers fall to a critical low, his program would release the birds.