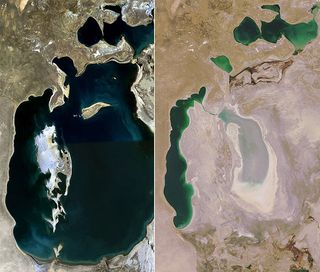 The International Union for the Conservation of Nature published 20 case studies illustrating its new criteria for a Red List of Ecosystems May 8 in the journal PLOS ONE.

The list, which measures an ecosystem's risk of collapse, will be similar to the group's authoritative Red List of Endangered Species, which created internationally accepted criteria for assessing extinction risk.

Here are the example ecosystems used to come up with the list criteria, from most to least endangered.

The fourth largest body of water in the world, the Aral Sea's ecosystem has been irrevocably changed by draining for irrigation, pollution and drought, scientists concluded in the study.

Shallow, flat and elevated above the surrounding landscapes, these peat bogs have a unique peat moss ecosystem that thrives in the acidic habitat. The plants survive only on rainwater.

A verdant forest dominated by Acacia trees (also called Gonakier), the Senegal River floodplain stands in sharp contrast to the arid steppes and desert nearby. The forest provides critical habitat for fish, birds and other species, including humans.

With beautiful and sturdy wildflowers but poor soils, these sand flats, located near Cape Town in South Africa, rely on regular fires to regenerate their seed banks.

One of the largest and most diverse wetlands in the world, the Coorong lagoons support millions of local fish and migrating birds.

South Australia's karst landscape, a province with features like caves, springs and water-filled sinkholes, connects to the ocean. Some fish species spend part of their lives at sea and in the freshwater pools, amid the swamp-like vegetation.

These treeless bogs near Sydney provide essential water during drought and shelter from predators in dense vegetation.

Swamps, marshes and lakes in the Murray-Darling Basin — Australia

This diverse ecosystem depends on floods raging through Australia's Murray-Darling Basin. The swamps, marshes and lakes are filled with reeds, grasses and shrubs that provide a wetland habitat for a wide range of birds.

Up to 50 feet (15 meters) tall, Alaska's giant kelp forests are home to a diverse array of marine life. Sea otters hunt for urchins and sea stars, and predators from Pacific cod up to killer whales rely on the brown kelp ecosystem.