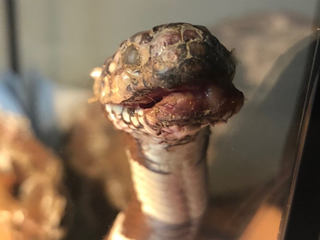 A newly emerging disease infects snakes and causes their skin to crust, eyes to cloud and faces to swell — and now, a stricken serpent has been spotted in California.

This is the first case of "snake fungal disease" seen in the state, according to a statement from the California Department of Fish and Wildlife (CDFW). The infected California kingsnake was found in the Sierra Nevada in Amador County by a member of the public who brought the "emaciated and suffering" animal to a wildlife care center. Tattered skin clung to the animal's warped face, making the cloudy-eyed snake look more like a mummy than a living creature.

As of yet, officials don't know how the disease might impact snake populations in California. Right now, their top priority is to make sure humans don't spread the fungus to snakes across the state.

There's no danger of humans catching the disfiguring snake disease, though. "There is no evidence that SFD is transmittable from snakes to humans," the report added.

Scientists first characterized snake fungal disease in 2008 and learned that a fungus called Ophidiomyces ophiodiicola causes the infection, according to CDFW. Since then, researchers have found the infectious organism in 30 snake species in the U.S. and Europe, 23 U.S. states and one Canadian province. Snakes can pick up the fungus through abrasions in their skin or physical contact with infected snakes. A severe infection causes the skin to become bumpy and molt repeatedly, while the affected snake's face may become too disfigured for the animal to feed properly. The weakened snakes tend to rest in open areas, vulnerable to the elements and nearby predators.

While O. ophiodiicola stands as the leading cause of skin infection among wild snakes, the contagion often only causes a mild infection and doesn't kill the affected animal, according to the U.S. Geological Survey (USGS). Environmental changes may be behind the "recent emergence of severe and fatal infections in some snake populations," USGS scientists said.

Snake fungal disease poses a threat to dwindling snake populations, including the timber rattlesnake and the federally threatened eastern massasauga, according to the CDFW statement. Officials encourage the public to report any sightings of snakes with skin sores or unusual behavior, but avoid handling or disturbing the animals. Just this week, the fungus was detected in tissues from a dead Florida water snake found by the CDFW in Folsom, Sacramento County, according to the organization's report.